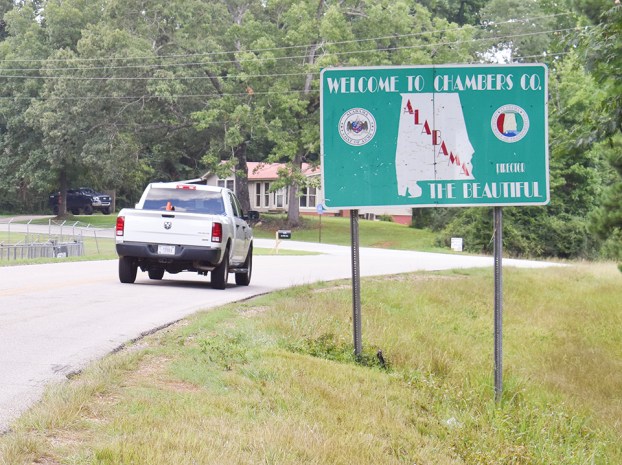 Pictured is the border sign for Chambers County at the beginning of County Road 212 after leaving Troup County. This patch of road will be repaved by county at the end of July. -- Dustin Duncan

LANETT — One of the roads providing access to West Point Lake in Lanett will see some work at the end of the month.

The project was approved by the Chambers County Commission Monday night after Harvill called the measure a ‘pavement preservation project.’

“Hopefully, we can preserve this road 5 to 10 years into the future,” Harvill said. “We can do a little bit now and save a lot in the future.”

He said the project is part of the county’s transportation plan for the year and was accounted for in the budget. He said crews should begin working on the road by the end of July.

Harvill said County Road 212 sees heavy traffic from recreational vehicles, as well as regular traffic heading to West Point Lake. He said the road isn’t in bad shape, but this project is designed to keep it well-maintained by spending a relatively small amount now to save in the future.

Harvill said this project won’t be similar to pavement projects on Interstate 85 because the county won’t mill and pave the asphalt the same way. He said this is merely preserving the pavement.

Harvill said it’s been about 24 years since the county has made any improvements to this stretch of County Road 212, dating back to 1995.

VALLEY — Tucked away in the former mill village of Fairfax, a former business is giving it another go with... read more