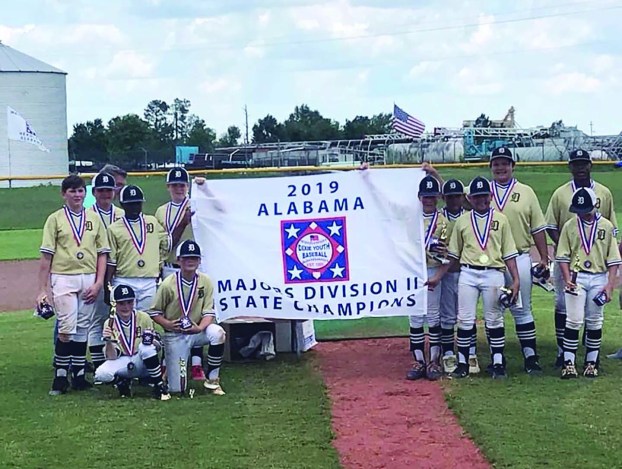 The Dadeville Dixie Youth Majors All-Star team put its motto “Fearless” to use in the state tournament to secure the championship and advance the team of 12 to the Dixie Youth World Series in North Carolina later this month.

“We got behind in one game,” coach Marc Gooden said. “It was the game to put us in the championship game at the state tournament. We were behind five runs and came back to win 6-5. We won the tournament without losing a game.”

“The players came up with it before we started playing a game and before the sub-district tournament,” Gooden said. “They just got down to business and came back.”

Gooden said he doesn’t believe his players understand the significance of winning the state tournament in Headland.

“They really haven’t said much,” Gooden said. “I don’t think they know what they have done. They were really excited just after winning but were ready to get back after it.”

To get ready for the World Series, Gooden said the team is practicing four days a week.

“We are taking Wednesdays off so they can go to church,” Gooden said. “We are practicing Mondays, Tuesdays, Thursdays and Fridays.”

“We have a pretty good team,” Gooden said. “We are well balanced with not too many weaknesses. They play well together. When we get behind, they pick each other up.”

Lumberton, North Carolina, is seven hours and 451 miles away from Dadeville. Gooden said the team spent more than $5,000 to compete in the state tournament to bring home the championship and is asking for help to compete in the World Series.

“We used just about everything we had for the state tournament,” Gooden said. “When you have 12 kids and trying to take them, it takes a lot.”

Gooden said travel plans have not yet been finalized for getting to Lumberton, North Carolina.

“I think we will leave on Wednesday (July 24) and get there Thursday morning,” Gooden said. “We have to be there for the opening ceremonies on Thursday.”