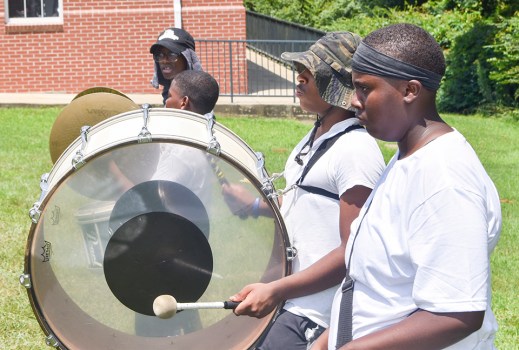 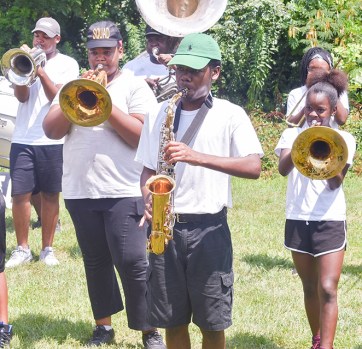 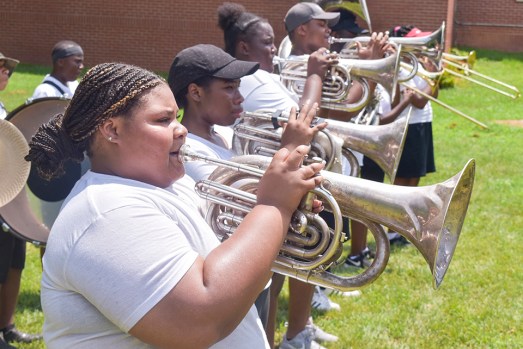 LaFAYETTE — Members of the LaFayette High School Marching Band got back to work this week on campus for band camp.

“This group has definitely been our best group,” LaFayette High School marching band director Michael Floyd said. “I’ve been here for about two-and-a-half years, and the product is starting to show.”

“Things that we’re accomplishing on day two was not even thought of on week two when I was (first) here,” Floyd said. “I’m definitely proud of them so far, and we’re just going to keep pushing.”

This year’s band is more focused and musically-inclined than any other band Floyd has directed in the past two years. Coming off of the hottest June in history, according to Copernicus Climate Change Service, Floyd said that the band members’ attitudes have been mostly positive.

“Out of about 40 members, we’ve had about one attitude,” he said. “When I say ‘attitude,’ I mean a slow-paced jog. They didn’t want to run, it was just a slow-paced jog. This year compared to two years ago has been completely different. Other than that situation, we don’t have any disrespect, anything of that nature.”

Floyd said that he quickly learned the most effective way to get the most out of the group was to give multiple breaks thoughout practices on hot days.

“Five-minute breaks, shade breaks, mental breaks, water breaks, Gatorade breaks, lay down breaks,” he said. “We put in about 45 minutes to two hours of work, and then give them a good, substantial break. After that break, they’ll power back up, the sun doesn’t even faze them.”

LaFayette’s band is known around the Greater Valley Area for the flair the school adds to its performances. The band keeps fans dancing in the stands throughout games with stand tunes featuring the latest hits and recent popular tracks. During Floyd’s time with the program, the Bulldogs have placed in the performance category for a parade and received a superior rating for the group’s flag line at a competition. Floyd’s goal for this season is to win 12 awards.

Last season, LaFayette performed in Lanett, LaGrange, Alexander City, Montgomery, Tuskegee and Destin, Florida in addition to every football game. This season, LaFayette is expanding its travel plans to Texas, Louisiana, Atlanta as well as pending plans in the Carolinas.

Floyd was hired by LaFayette High School after graduating from Alabama State two years ago. He began working with the Bulldogs’ program while he was finishing his bachelors. Floyd graduated from Central High School in 2011, where he was on the drumline in a traditional, corps-style band. Floyd said that his experience on the corps side allowed him to sharpen his musicality skills, something, in addition to entertaining, that he strives to bring to LaFayette’s band program.

LaFayette’s first regular-season game this year is at Lanett High School on Aug. 30.