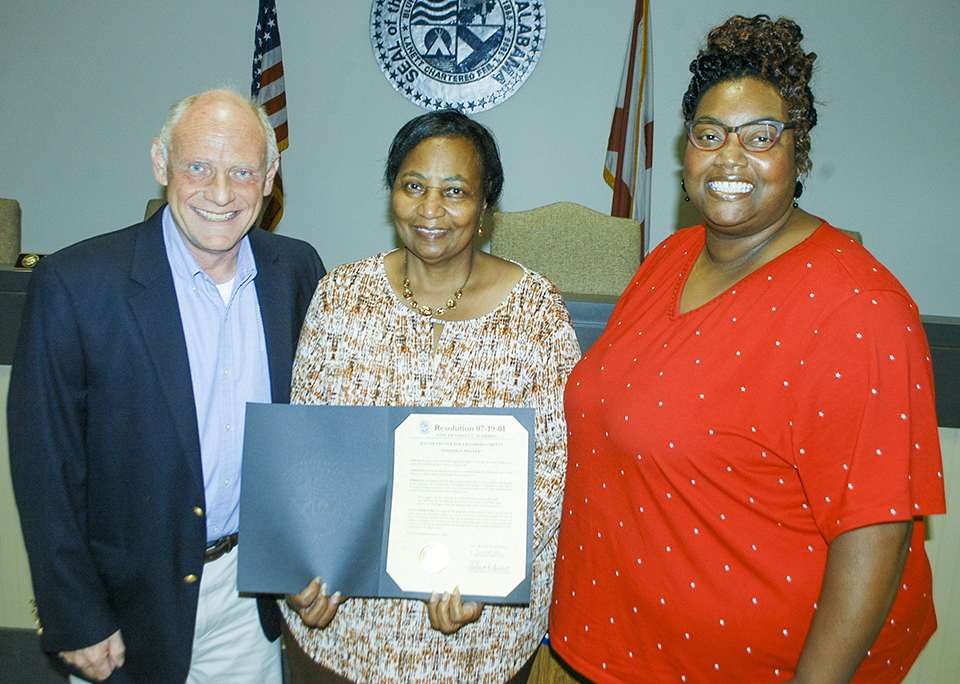 LANETT —The Lanett City Council approved the purchase of a new ambulance Monday night at its regular council meeting.

The council also accepted a paving bid, adopted a resolution to seek a Community Development Block Grant (CDBG) and backed this year’s Day of Prayer on Friday, Aug. 2 in downtown LaFayette.

The new ambulance is a Ford F-450 with a price tag of $208,000. It will be purchased from Frazer Ambulance Company in Houston, Texas, with the Houston-Galveston Area Council facilitating the purchase.

“This company has a proven track record,” Lanett Fire & EMS Chief Johnny Allen said. “The truck being replaced has over 260,000 miles on it. The new one will look very similar to one we already have and will give us three advanced life support ambulances.”

Allen said he considered renovating the old ambulance with a remount, which is basically the back of the vehicle.

The city announced it has applied for a grant, covering 45 percent of the purchase price of the vehicle. There’s a 50-50 chance of getting it, Allen said.

“We are careful with how we use our new ambulances,” Allen said. “We don’t have many long hauls out of town.”

“I support this,” Councilman Charles Looser said. “I have probably been in the back of an ambulance more than anyone else here tonight other than Johnny.”

The action was approved in a unanimous vote.

The CDBG request is for $250,000 to be used for Phase IV of the downtown streetscape in Lanett. It’s a secondary application and gives the city two chances of receiving funds for the fourth phase in the project.

“If approved, this would cover the area from the Tanyard Creek bridge on North Lanier Avenue to Cherry Drive,” Mayor Kyle McCoy said. “The first grant we applied for covered the area from the bridge to the state line. It also would let us do some underground work for flood control.”

Should the second grant request be approved, the city would have a commitment of just less than $50,000 for its share of the costs plus project engineering and administration costs.

“Everything is looking really good with the streetscape,” Councilwoman Angelia Thomas said. “I hope we can get this finished.”

The paving is taking place on 19th Street SW, which runs from Veterans Memorial Parkway toward the CSX mainline in the West Shawmut community.

“I am glad we are doing this,” Councilman Jamie Heard said. “This is needed.”

The paving contract was awarded Monday night to Chris Clark Grading and Paving, Inc. of Lanett. McCoy said the company provided the low bid of just less than $100,000.

The project will include a layer of Perma-Flex, a liquid polyurethane waterproofing coating and a one-inch wearing surface. Manhole and valve risers will be installed as well.

Once the notice to proceed is given, the project should be completed in 30 days.

The council approved a resolution expressing its support for the annual Day of Prayer, which takes place just off the Chambers County Courthouse property on Aug. 2. A copy of the resolution was presented to the event organizer Diane Perry.

Prayers will be going out to local, state and national officials along with teachers, support staff and children as a new school year will soon begin.

“If we don’t take the time to pray for our leaders and our school children no one else will,” Perry said. “We will be giving out free school supplies that evening.”

The council approved a resolution to donate $500 to help cover the costs of school supplies and refreshments.