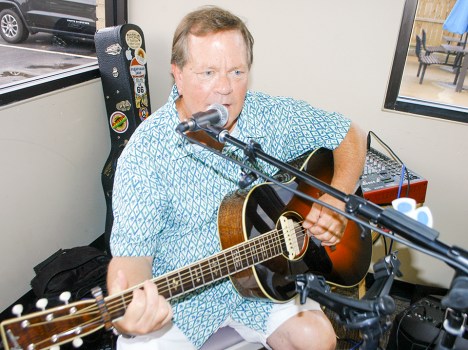 Lanett musician Roger Wheeler loves being able to play near home in front of a live crowd. He played at Cracker Jack’s in Valley Thursday night. -- Wayne Clark 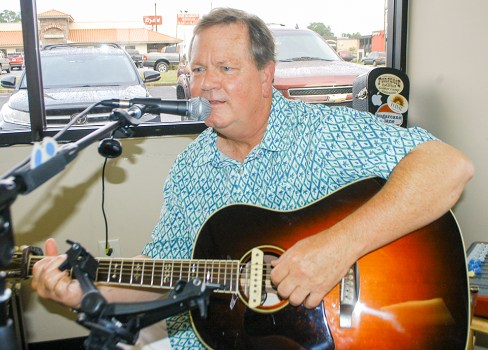 Lanett musician Roger Wheeler loves being able to play near home in front of a live crowd. He played at Cracker Jack’s in Valley Thursday night. -- Wayne Clark

He came back home to play before a live audience.

Wheeler was the evening’s entertainment for Cracker Jack’s Seafood Bar in Valley Thursday night. A lefty, Wheeler plays the guitar, mandolin and sings original songs along with familiar pop classics by people like Jimmy Buffett, James Taylor, Paul Simon, the Eagles, Jackson Browne, the Pure Prairie League and others.

Wheeler is dedicated to his music, and people throughout the Alabama-Georgia-Florida region enjoy hearing him play.

“I’m living in Spanish Fort now and have some really good mentors,” he said. “They tell me I can really play and shouldn’t be so apologetic. Being here tonight means a lot to me. It’s my first time to come back home and play. It’s really cool.”

Some of his friends call him Day Job Rog because he loves to play and sing in the evenings, but is not inclined to give up his daytime job. When he’s not playing music, he sells surveying equipment along the gulf coast.

Playing in front of live crowds is one of Wheeler’s biggest joys as a musician.

“I play in the Mobile-Baldwin County area a lot, and I’ve done gigs at the crawfish festival in Birmingham,” he said. “I really enjoy playing there.”

Wheeler is good friends with Anthony Crawford, of Loxley, who used to tour with Neil Young.

“He recorded a song I’ve written named ‘A Deeper Shade of Blue,’” Wheeler said. “He asked me to lighten up and do something funny. I wrote him one entitled ‘It’s a Shame my Six Pack has Turned Into a Keg.’”

Wheeler grew up on South 4th Street in Lanett and graduated from Lanett High School in 1979. His familial ties to the area run deep and include two school board members, two pharmacists, two oncologists and two Carmen’s.

“It’s crazy,” he said. “My wife’s name is Carmen. My sister Pam is married to a man named John Carmon. My mother, Leta Wheeler, was a member of the Lanett City School Board, and my brother-in-law, John Minter, was also a member of that board. Two of John’s children, Alex and Emily, are cancer doctors.”

Cracker Jack’s co-owner Ramona Russell was also a classmate of his at LHS.

“I was born and raised in Lanett,” she said. “It’s good to be home. We have live entertainment four days a week. In the summer months, we start at 8 p.m. and go until around 10 p.m.”

Russell said in the winter months, entertainment gets going at about 7 p.m.

“We invite everyone to come out and join us,” she said. “We have fun evenings at Cracker Jack’s. They tell us the food is good too.”

“I’ll do oldies by the Rascals, the Mamas and the Papas, Van Morrison and others,” he said. “Wherever I’m at I just want people to relax, enjoy the music they love and have a good time.”