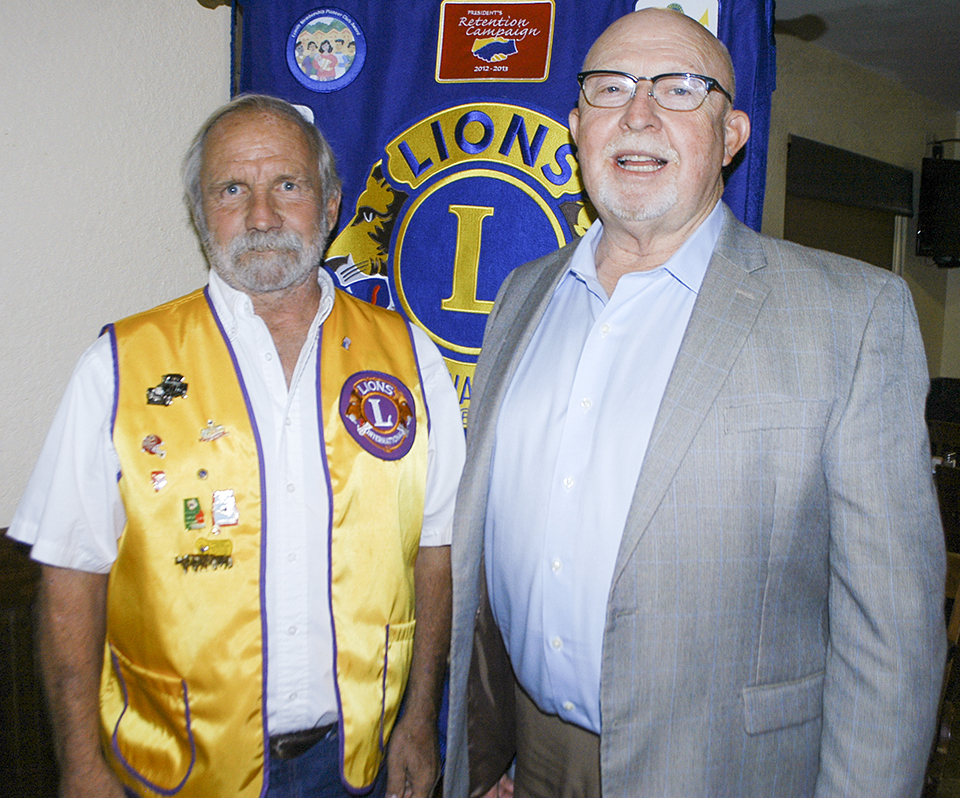 VALLEY — State Sen. Randy Price was the guest speaker at the Monday evening meeting of the Valley Lions Club.

He talked about the recently completed legislative session and what he considers significant issues upcoming in 2020.

Sen. Price was accompanied by his wife, Lee County Revenue Commissioner Olene Price. The 2019 session was the first for Price, but politics is nothing new to him. He’s been active in Republican Party politics for 36 years.

“It was a very tense session,” he said. “It seemed that way to me, but it was my first one. I talked with some veteran legislators who had been there for a long time, and they told me it was that way for them too.”

When the regular session ended, it was gaveled into a special session by Gov. Kay Ivey. That was very unusual, but it showed how determined Gov. Ivey was to get an infrastructure bill passed.

“We called it Rebuild Alabama,” Price said. “Others called it a gas tax.”

Before the approval of Rebuild Alabama, the state had not had a new gas tax since 1992. Even with the new tax, Alabama is well behind some neighboring states in what they charge at the pump.

“One of the main reasons we did it was (for) economic development,” Price said. “The Chambers County Development Authority is a good example of what needs to be done if your community is to grow. One thing holding us back is our infrastructure. If we don’t do something about improving our roads and bridges, we will start to lose jobs. We also have to think about the safety of our children. Over 300,000 children get on school buses every school day. We need to have safe roads and bridges for them.”

Price said he was pleased the legislature approved a new broadband bill.

“It will be good for farmers and school systems,” he said. “Chambers County will be getting funds for this. I’m glad we were able to do this.”

The state has two budgets, one for education and one for everything else. Education gets the lion’s share, some $7.1 billion. Price, who was raised by a teacher, said he was pleased for teachers to have gotten a 4 percent pay raise this year and for Southern Union to have gotten more money for workforce development.

“We need to make sure we are educating our young people in ways that will attract industry,” Price said. “One thing we want to continue doing is to take care of our teachers. In this part of the state, we need to be competitive with what Georgia pays their teachers.”

Price said he had misgivings about proposed gun legislation.

For three years in a row, the legislature has grappled with a proposal known as constitutional carry. It would make having pistol permits voluntary.

“I talked with five sheriffs and lots of local police chiefs about this,” Price said. “They all emphasize one thing — the safety of their officers. I voted no on this. I think we need to require pistol permits to help keep our officers safe.”

Price is looking at a possible compromise in having what’s known as a lifetime pistol permit.

“I was able to get it out of committee in an 8-1 vote,” he said. “It would build a statewide database. It’s on your driver’s license. When the police pull someone over, they will know if they have a pistol permit or have been denied one. I think this will be giving law enforcement officers another safety tool.”

Price said the state’s education budget is in good shape but that the general fund portion continues to struggle. It could get some help, he believes, if a state lottery is approved.

Price also mentioned that the abortion bill passed that would make virtually all instances of abortion illegal except when the health of the mother is in danger.

“We were trying to pass legislation that would make an impact with the courts,” he said. “Time will tell on this. It’s my personal belief that we shouldn’t be using abortion as a means of birth control. According to the UAB doctors, the state is seeing a lot of that.”

“Let’s say a pregnant woman decides to have an abortion,” he said. “She’s driving to the clinic to have it when a car runs a red light and hits her. It kills her. Do you know how many murders the driver will be charged with? Two.”

Price also defended his decision to a Lions Club member who asked about how the law works.

“If a woman is raped and gets pregnant, would the law prevent her from getting an abortion?”” the club member asked. “Yes,” Price replied.

“It’s a personal opinion, and we’ll have to agree to disagree without being disagreeable,” Price said.

Price said he supported a lottery because the general fund is in trouble and needs more sources of revenue.

“We need an additional $900 million to do what we need to do for prisons,” he said. “We need more money for Medicaid. Next year will be more difficult for us budget-wise. We would get more bang for the buck could we put lottery money in the general fund.”

One member of the club told Price he had heard there was a possibility the federal government might take over the state prisons if the state didn’t do something soon.

“That’s possible,” Price said, “and it may take a lot of money to keep that from happening.”

Price said that a Senate-House joint committee is studying how to deal with this.

“We don’t want the feds to take over our prison system,” he said. “We want them to give us a timeline to avoid this.”