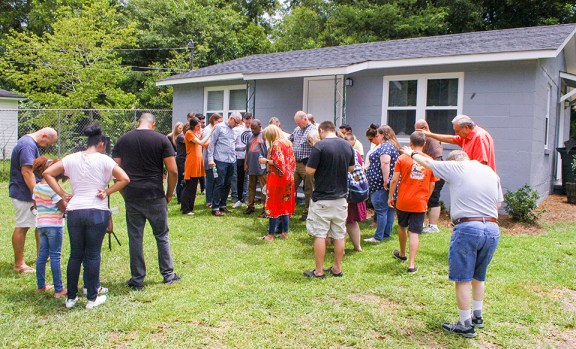 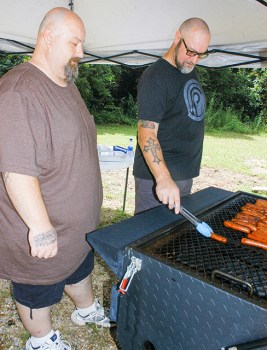 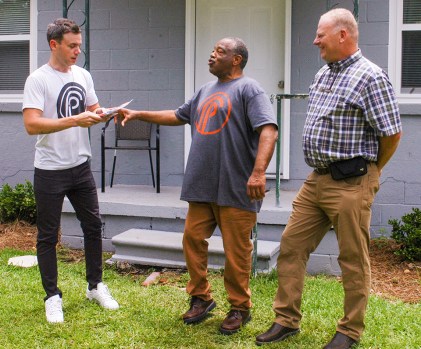 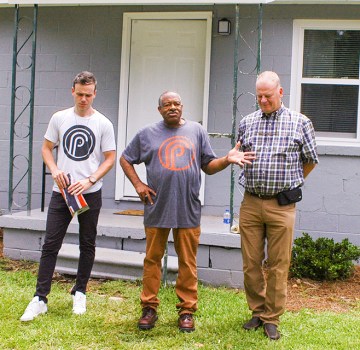 WEST POINT — It’s been a good year for Willie McQueen.

May 5 marked his tenth anniversary of being free from drugs and alcohol, and on Sunday, a dedication ceremony was held to officially open a new home he’s living in right across the street from Keeney Memorial United Methodist Church.

West Point Mayor Steve Tramell sees the new home as an example of what can happen over and over again in West Point. Back in February, that house had been abandoned, and needed much in the way of rehab work to be lived in again. Members of Willie’s church, Refuge Point, took on the task of making that empty structure a livable place for their vision-impaired friend. Refuge Point Church got the help of the Chattahoochee Fuller Center Project (CFCP) for the work.

“We want to thank Kim Roberts and Robin Pierre of the Fuller Center for their help,” Tramell said at the dedication ceremony. “This probably wouldn’t have happened without their help. We thank them so much for what they did. If you had seen this house back in February and look at it today, you can really appreciate the work that went into it.”

A major step in the turnaround took place in early March. A group of students from Wittenberg University in Springfield, Ohio, made the journey south to do volunteer work for the CFCP. It was the week following the devastating tornado outbreak that killed 23 people in nearby Beauregard. While West Point and the Greater Valley Area didn’t see any tornadoes, the area did get some stormy weather that Sunday afternoon.

“The stormy weather damaged the roof of this house,” Pastor Matthew Thrower of Refuge Point Church said. “The college students did a great job of cleaning up inside that week.”

“We thank everyone who helped this project in any way,” Thrower said. “Refuge Point Church is involved in transforming this community.”

“This was an empty house not that long ago,” McQueen said. “Now it’s a home, a good home, and I am very grateful for that. I love you all.”

McQueen broke into a little dance when Thrower presented him a housewarming gift — an Auburn flag he can display outside the home.

McQueen had a special word of thanks for Mark Colley.

“He has been very patient and helpful to me,” he said. “He takes me to places I need to get to.”

“I love Refuge Point Church,” McQueen continued. “I went there to hear one of Pastor Matthew’s sermons six years ago, and I’ve been going back there ever since. The work being done by the church in this community is such a blessing. I promise you that I will take care of this home to the best of my ability. I wish we had more houses like this in West Point.”

Seizing on that point, Tramell agreed the city needed many more houses of the same kind.

A sizable crowd was on hand for the dedication. Following the ceremony, they toured the new home and took turns congratulating McQueen on having a nice place he can call his own.

“It’s a great house,” McQueen said. “I am so blessed. I can’t tell everyone how happy I am today.”

In the front yard outside the home a tent was set up for Refuge Point members Jeremy Creech and Chris Sabukosek to grill hot dogs for the big crowd. They also had bottles of cold water, an item especially popular on a hot day.