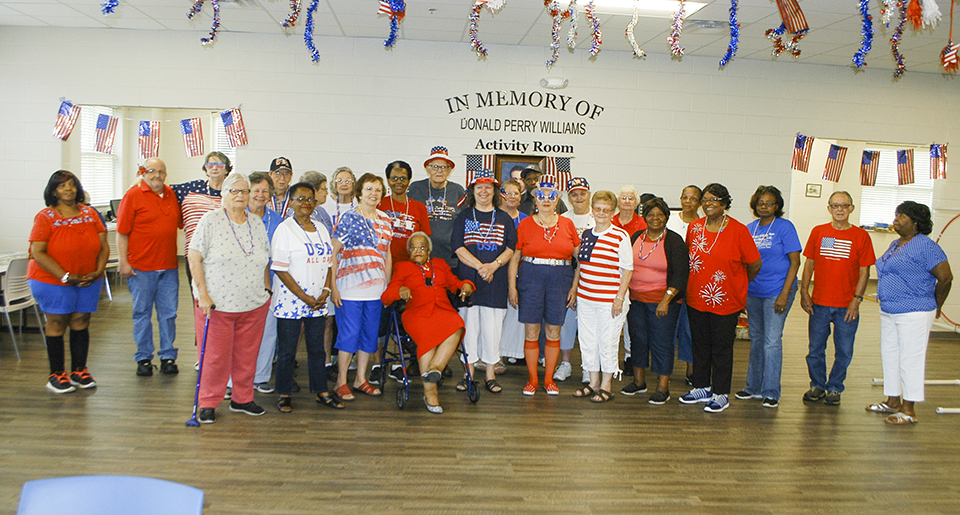 It was a feel-good day at both centers and a good time for the seniors to talk about what July 4 means to them.

“It’s a special day for all of us,” said Valley senior center participant Charles Pigg, who served in the National Guard during the Korean War. “It’s a day for us to enjoy and appreciate our freedom.”

Elbert Sanders said it’s a day to appreciate the sacrifices being made by active duty personnel and their families. While other Americans are enjoying family picnics and fireworks shows, the men and women of the military are manning their posts and doing their jobs to keep our country free.

Mr. Sanders’ dad, Ernest Gaines Sanders, served in World War I. He had two brothers, Charles and Ben, serve in the military as well.

“Not everyone has the kind of life we have in the U.S.,” he said.

A free country, said Diane Sanders, means that Americans have freedom of speech and freedom of religion. She had two uncles, Winston Bolt and Omer Bowen, serve in WW II, and two nephews, Tommy Mills and Blake Diamond, serve in Operation Desert Storm in 1991.

“We should appreciate what our soldiers do and remember their families,” she said. “It’s a day when we should be closer to each other and stop complaining so much.”

Phoebe Crump said that July 4 is a day for her to appreciate the service and sacrifices made by her dad, the late Charles Crump, and brother, Chuck Crump. Both served in the military.

“We live in the best country in the world,” she said. “It’s the land of the free and home of the brave.”

Zilliah Kendrick said she was proud of five members of her family who had served in the military during Operation Desert Storm.

“I had three in the Army, one in the Marines and one in the Navy,” she said. “Three men and two women. Thank God they all returned home safely.”

Valley Senior Center participants Mike Davis and Robert Yarbrough Jr. are veterans. Davis served in the U.S. Air Force from 1973-77 while Yarbrough was in the Navy from 1965-69.

“July the 4 is a day for us to celebrate our independence and to appreciate the many men and women who have served our country,” Davis said.

“It’s our nation’s birthday,” added Yarbrough. “It’s a day for all of us to feel good about being Americans and to celebrate being free.”

The Lanett center has two gold star sisters. Ruth Lariscy and Betty Calhoun lost a brother in the Korean War. They all grew up in the Fairfax community. Their brother, Roy Lee Fincher, was only 19 when he died. Another brother, Edward Fincher, served in Vietnam and retired from the U.S. Army.

“July 4 is a day for patriotism and realizing the importance of defending our country,” Lariscy said.

Calhoun said she was proud of her brothers’ service and that of her husband, Mac Calhoun, who served in the Army.

Fannie Little said she was proud of her husband’s service. Robert Little served in WW II.

“July 4 is a day to celebrate our country’s birthday and the freedoms we have as Americans,” Little said.

Holidays like July 4, said Lanett senior Doris Reed, are a time for her to appreciate the service of people like her brother, Robert Avery, who served in the Army during the Vietnam War and later retired from the military.

Herschel and Wanda Allen are proud of their son’s service. Don Allen was aboard the USS Independence from 1991-99 and helped monitor Iraq’s compliance with the no-fly zone. Herschel had three brothers to serve in the Pacific Theater in WWII and a brother-in-law to serve in the Korean War.

“On July 4, we should all be grateful to live in a nation that is free,” said Wanda Allen. “We should all be thankful for all those who have fought to keep it that way.”