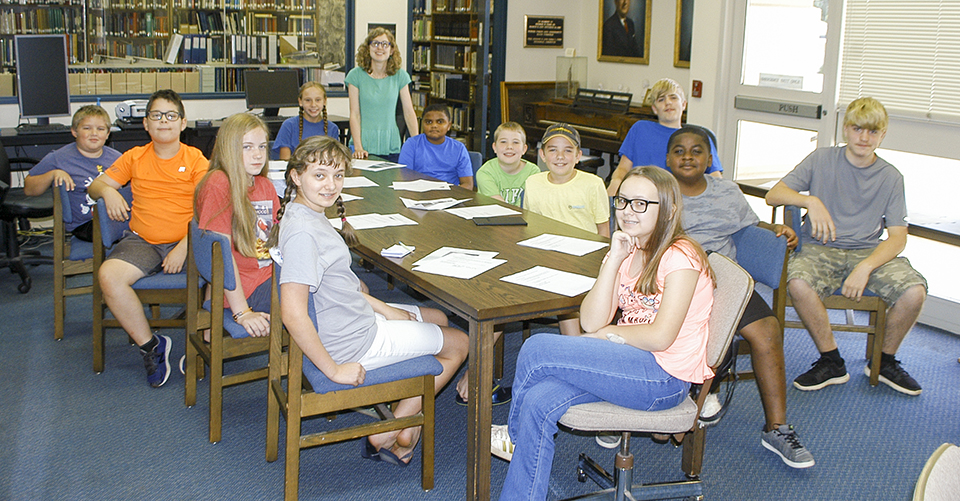 The history detectives are enjoying learning about history this summer at Cobb Memorial Archives. Archivist Robin Brown, in back, has been talking to them about local soldiers in World War II and the race to the moon between the U.S. and Soviet Union in the 1960s. The history detectives include, on the left, Brady Bannister, Cody Robles, Allie Grace Banks and Karen Levens; on the right are Riley Toland, Devon Truitt, Asa Smith, Eli Sims, Cameron Johnson and Ember Williams. In back are Levi Banks and Samuel Banks. -- Wayne Clark

VALLEY —Local children in the 9- to 12-year-old age group have been having fun this summer in a program offered through Cobb Memorial Archives.

They are the history detectives, and they have been learning interesting things by looking at items at the library’s archives.

In one session, they investigated an Army trunk belonging to Corp. William Brown of Langdale, who was killed in the 1942 in the Battle of Corregidor. The children learned he’d been awarded the Purple Heart, and he’d been stationed in the Philippines before the war began.

The trunk contained such personal effects as a cigar box and letters from home. The trunk was donated to Cobb Archives by Corp. Brown’s niece, Emily Garrett.

Through the trunk, the children learned of the hardship families went through during war. Corp. Brown was listed as missing in action before his family learned he’d been killed in action.

This week, the history detectives have been studying the space race and Neil Armstrong’s walk on the moon, which took place 50 years ago on Saturday.

“I’ve always wondered what it was like to be in a spaceship,” history detective Eli Sims said. “The astronauts are weightless. I know they have to exercise a lot to stay in shape.”

The children learned about local company WestPoint Pepperell’s role in the race to the moon.

“They helped make the flotation bags the astronauts floated in when they were in the ocean waiting to be picked up by a helicopter,” Archivist Robin Brown said. “They’d just gotten out of the capsule after a successful mission in space.”

The floatation bags, Brown explained, served as a forerunner to the air bags that cars and can protect people in car accidents.

The fire-resistant fabric used by the astronauts in the 1960s is used today by firefighters. “That’s another benefit of the space program,” Brown said.