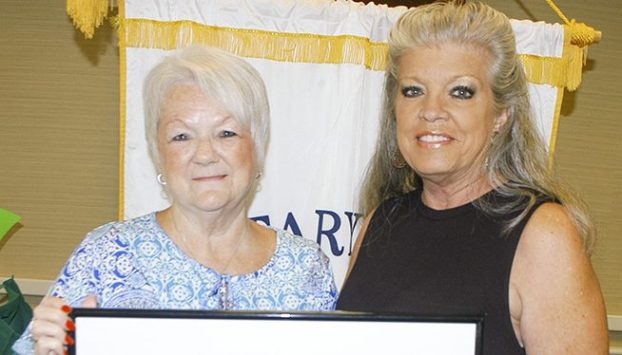 Cathy Martin (left) was the guest speaker at Thursday’s meeting of the West Point Rotary Club. She was a civilian employee at the Pentagon on Sept. 11, 2001.

LANETT — Lake Harding resident Cathy Martin was working at the Pentagon on the morning of Sept. 11, 2001, and owes her life to a malfunctioning dot matrix printer.

At the moment, American Airlines Flight 77 crashed dead center into her work area, she was a good distance away and getting frustrated by a piece of office equipment that wasn’t working right.

Martin was the guest speaker at Thursday’s meeting of the West Point Rotary Club.

“It was one of those old printers, the ones with the perforated edges, and it wasn’t working right that day,” she recalled. “It was a hectic time of year for us. A new fiscal year would start on Oct. 1, and we were closing out a $356 billion budget. We were responsible for the pay, benefits and entitlements for all branches of the military. I had been on the phone that morning with a three-star general and was updating him on where we were on balancing the contracts.”

Her right-hand assistant, a man named Cortez Gee, had been upstairs with her when she was trying to get the machine to work properly. He left to go downstairs to their work area just as the plane hit at 9:37 a.m. On Friday of that week, Martin would see his name scroll down the screen as she was watching a news program. The list named the 125 people killed at the Pentagon during the attack.

Martin and Gee were due to be back in their office at 9:30 a.m. Gee arrived a few minutes late while Martin was still struggling to get some printing done.

Martin recalls feeling the building shake and making her way to a window to see outside. When she saw white flakes falling to the ground she thought, “how odd for it to be snowing in September.”

Those white flakes weren’t snow; they were ash from the burning plane and building. The air ventilation went down quickly followed by the lights. Martin saw people scrambling in the hallways making their way to exits. She heard that there was a fire in the building and people had been told to exit.

“At the time, we knew nothing of what had happened in New York City, where the twin towers had been hit by planes,” Martin said. “Some of the doors had been closed due to smoke-filled corridors. Two of my co-workers, Regina and Pat, joined me in trying to get out of the building. We first tried to get to a courtyard area. We saw people who had been killed or injured being taken there, and we knew we had to go out somewhere else.”

That meant making their way to a parking area on the opposite side. It was a chaotic scene. Everyone knew it was something very serious, but very few realized that a plane had hit the building.

“We heard talk that a bomb had gone off,” Martin said. “We knew that the parking lot was a designated place to go in emergencies. About 10 or 15 minutes after getting there, a general came out to tell us to leave where we were because another plane was on the way.”

That fourth plane was United Airlines Flight 93, which had left Newark International Airport at 8:42 a.m., enroute to San Francisco with a crew of seven and 33 passengers, including four hijackers. The plane was believed to be redirected to Washington D.C., possibly to crash into the Capitol or the White House. The passengers had learned from their cell phones that the hijackers were crashing the planes into buildings. They attempted to subdue them, causing the plane to crash in a field near Shanksville, Pennsylvania just past 10 a.m.

The Pentagon employees, 90 percent of them civilians like Martin, walked to a row of hotels not far away from the massive building.

“We got to a hotel at 11 o’clock,” Martin said. “It was there that we learned of the World Trade Center being hit. We watched news reports of what had happened at the Pentagon. The people at the hotel were very hospitable, but they knew most of us wanted to go home.”

That was easier said that done.

The Washington metro area was snarled in massive traffic jams everywhere. Martin tried to call her husband David, who worked 11 miles away in Fairfax, Virginia. Despite repeated attempts to call him, she couldn’t get through for several hours.

The hardest thing for her to do was to remain calm and not break down emotionally.
“I had to stay strong for Regina and Pat,” she said. “There was no communication, and we were hearing all sorts of awful things. I didn’t know what was going on with my husband, and we had heard that another plane was on the way to D.C. It’s a horrible feeling to tell people you are OK when you are not.”

A co-worker offered Martin a ride to a mall near her home in Stafford, Virginia. He’d managed to walk back to the parking area to retrieve his car. Martin took him up on it but movement was extremely slow.

At 3 p.m., Martin again called home and this time her husband answered. He’d been frantic not having heard from her all day and knowing that the very part of the building where she worked had been hit by a plane. It only took a couple of minutes for David to drive up and meet her but in that time, Martin noticed something very strange.

When David drove up, he was accompanied by their daughter and granddaughter. It was then that Martin couldn’t hold back any longer.

Back in the comfort of her home, Martin spent three restless days in bed. She watched news reports amid lots of tossing and turning, getting very little sleep.

“I hardly slept until Friday, and the next day was a hard one too,” she said. “That’s when I saw the name of Cortez Gee, my right-hand man, among the names of those who had died.”

Martin was back at work on Monday and learned that her office had been pretty much destroyed. They outfitted her in protective spacesuit-like gear and let her go back in to see if she could find the files she’d been working on.

“I did,” she said, “and I told my general that I’d be able to close out if I had a computer to work with. He arranged that for me.”

Closing out a budget prior to Oct. 1 was extremely difficult, given the circumstances.

“They put me up in a hotel for awhile, and my husband joined me,” she said. “We managed and we rebuilt.”

It’s been more than 17 years now since that terrible day in New York City and Washington. Cathy and David both retired and moved back home to Alabama, where they bought a home on Lake Harding. David died seven years ago, and Cathy remains haunted by the events of 9-11.

“I was spared,” she said, “but many others died. Fifty-nine people on the airplane were killed. A total of 125 people at the Pentagon, including some of my good friends, were killed. My husband is now gone, but I’m still here. Thank you for hearing my story today. It’s just like that day at the mall. So many people don’t know what happened. As long as I’m able, I want to tell people what I experienced. We should never forget those who died on 9/11.”

The Sept. 11 attacks were a series of four coordinated terrorist attacks be the Islamist terrorist group Al-Qaida against the U.S. The attacks killed a total of 2,996 people and injured more than 6,000 others. More than $10 billion in infrastructure and property damage was sustained that day. Additional people have died due to cancer and respiratory-related illnesses.

Most of those who died were civilians. Non-civilians included 343 firefighters, 72 law enforcement officers, 55 military personnel and the 19 terrorists. The death toll includes 67 people from Britain and people from many other foreign countries.

Point graduate reflects fondly on his days as a student

VALLEY — Tavaris Taylor was a student at Atlanta Christian College and on a tour of West Point when the... read more