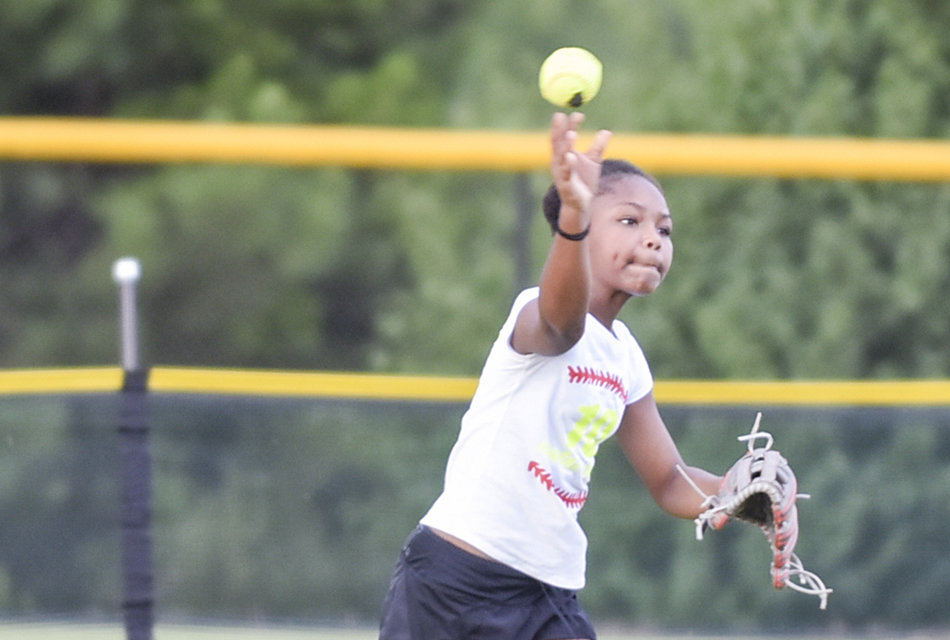 GUNNING IT: Nine-year-old Chaaree Wiilliams throws a ball from the outfield durng the Valley 9 and 10-year-old All-Star practice on Monday evening. The group is headed down to Montgomery on July 12 to play in the state tournament at Lagoon Park. The All-Stars recently won the district tournament in Talladaega. The win marked the first district championship for a Valley softball team in that age group. Photo by Rashad Mlligan

VALLEY — The Valley 9 and 10-year-old softball All-Stars are preparing for this weekend’s state tournament in Montgomery.

Tournament play begins against Piedmont on July 12 at 7:30 p.m. EDT. in Lagoon Park.

During the regular season, the team played up an age group against 12-year-old teams.

“When I saw [older teams] in the truck when we pulled up to the ballpark, I was kind of nervous because they had good uniforms, too,” 9-year-old shortstop Hadley Helleso said. “They looked like good players. I was pretty surprised that we beat them because they were big.”

For other players, like 10-year-old second baseman Zorriah Simpson, playing up was something that they’ve done since they’ve begun playing softball at six-years-old.

“I’ve played other people older than me, so I wasn’t as scared,” Simpson said. “I’ve played 9-12 [year-olds] for two years. I’ve played against 12-year-old girls so there’s no reason to be scared.”

Playing up in the regular season prepared the all-stars for the postseason, breezing past the competition in the district tournament. The team defeated Talladega, Sylacauga 23-1and Sylacauga again in the district championship game 9-1.

“This a young-aged group, we’ve got a few elder girls on the team who have been on all-star teams together for a time or two,” Coach Helleso said. “You can tell who those couple of players are, and the younger girls are coming along. They’re hitting the ball, driving the ball, making awesome plays in the field, they’re just doing really well. It’s a whole team effort between all of them. They play well as a team.”

The coaches and players mutually agreed that the players have been pushed to the limits this season, but the team understands why that’s the case.

“The coaches push us really hard,” Helleso said. “I’m glad that they do because if they didn’t push us as hard as they did, then this team wouldn’t like it is now going to state.”

The players said that the team’s goal is to bring back home the state title.