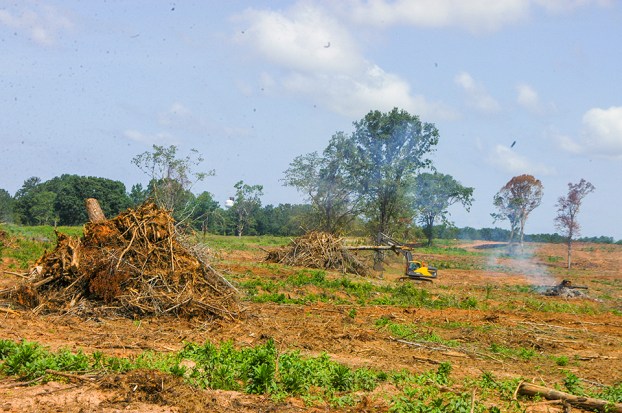 The site closest to Fob James Drive is almost completely cleaned off, but work is continuing on the land between 55th Street and the Intestate. - Wayne Clark

VALLEY  — The new concrete curbs have gone in on Four Star Drive, but the work has fallen behind schedule on what will be the newest road in the City of Valley.

“The road needs to get caught up,” Mayor Leonard Riley said. “It’s way past due.”

Grading is under way where the new Four Star Freightliner Store will be going up next to the Lanier-Carter Mill site. The new business is expected to open before the end of the current calendar year. Four Star Freightliner has several businesses open off of Interstate highways in Alabama, Georgia and Florida.

The new Valley store will be Four Star Freightliner’s seventh location. Other locations are in Montgomery and Dothan in Alabama, as well as one in Tallahassee, Florida, and locations in Albany, Tifton and Valdosta, Georgia. The company employs more than 100 people.

“We have three more days of burning,” Riley said Monday. “We will be cutting down more trees. A lot has been accomplished there, but we still have a lot more work to do.”

The city has purchased an estimated 1,150 acres of land in recent years. The land is being cleared of trees to hasten its development as a future commercial or industrial site.

From the timber sales from the purchased land and the sale of the property to WestRock (for their new distribution center) and Four Star Freightliner, the city has brought in around $1.2 million. There’s a strong potential to bring in much more when this land is sold for development.

LaFAYETTE — With just a little more than a month before schools welcome students back into classrooms, the Chambers County... read more