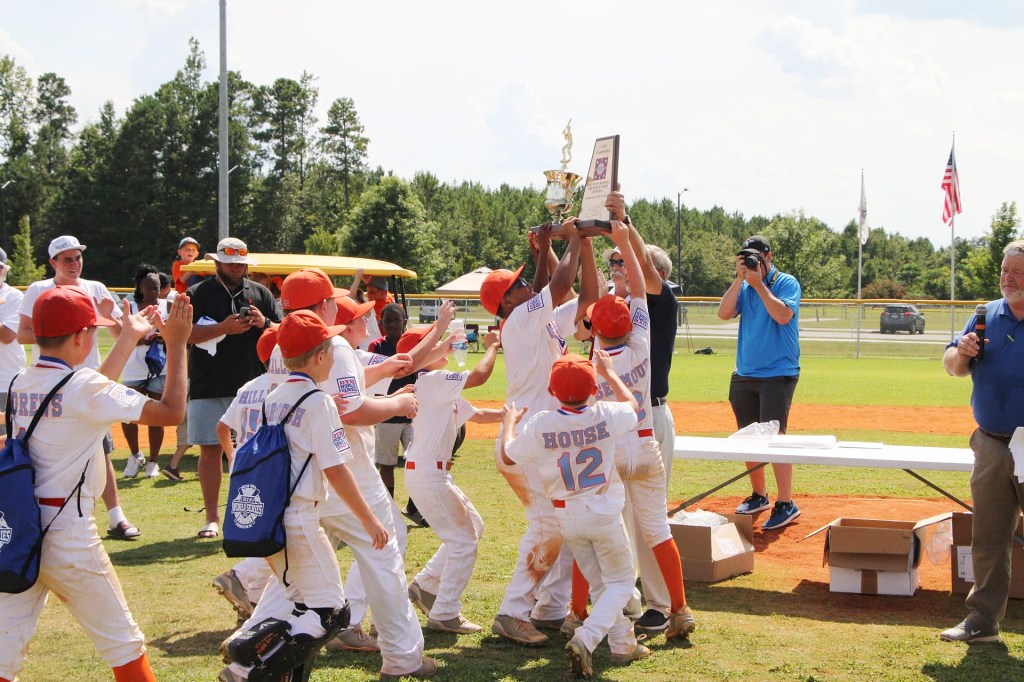 LUMBERTON, N.C. — It took an incredible comeback and some resolve, but the Valley 9 and 10 year old all-stars made history Wednesday in winning the 2019 Dixie Youth Division II AAA World Series.

The team rallied to win in extra innings in an 8-7 victory over North Carolina and then rolled past Virginia for a 12-2 win in the title game. According to Mark Hudmon with the Valley Recreation Department, the team is the first Valley team to ever win a baseball World Series.

“It’s a lot of emotions, a lot of relief,” Valley 9 and 10-year-old all-star baseball coach Shane Andrews said. “These last few days have been rough mentally, physically, and it all worked out.”

Valley had to play two games on the final day of the five-day tournament because the all-stars lost to North Carolina 7-2 on Tuesday, the team’s first loss of the summer.

“I think that we had to lose a game,” Coach Andrews said. “There are nine and 10-year-old kids that had won about 15, 16 games in a row, and I think [the loss] brought them back down to where they needed to be to focus a little bit more. I think they were a little too laid back going into the second game against North Carolina, and then the kids just reset. They refocused.”

Valley opened up the day with a rematch with North Carolina at 9:30 a.m. The local all-stars took a 2-0 advantage early before their opponents scored six unanswered runs.

“Right then, they could’ve given up, but it showed their character,” Andrews said.

In the bottom of the third inning, Valley “bunt king” Phi Madden reached first base on a bunt. Madden then stole second base and reached third on a wild throw. Leadoff hitter Cole House then got on base after being walked. House stole second, and Madden eventually scored on a sacrifice groundout to bring Valley within three. Mason Yarbrough then hit an RBI double to center field to cut the deficit to two runs. Valley tacked on one more run before the inning ending.

North Carolina responded by scoring another run in the top of the fourth inning to push the lead back to two. Valley was unable to score in both the fourth and fifth innings, but in the bottom of the sixth inning, Valley scored two runs to send the game into extra innings.

With two outs in the top of the seventh inning, North Carolina sent a runner from third base home on a Yarbrough curveball that was left short of the plate. Valley catcher Hunter Andrews reacted quickly to the loose ball, picked it up and tagged a North Carolina runner out to end that half of the inning.

“I was like ‘I have to make this play for my team,’” Andrews said. “I wanted to win that game really badly in order to go to the championship.”

In the bottom of the seventh inning, House hit a standing double and Andrews and Yarbrough got on base as well to load the bases for Jax Miller. On an 0-1 count, Miller belted a shot into left-center field to walk off the victory for Valley.

“These last couple of days with Jax, I’ve been trying to get him to see the ball in one particular spot,” Coach Andrews said. “If it’s not in that spot, just lay off of it. Typically, if they throw Jax a strike, it’s a good one. If it’s a bad pitch to him, it’s normally a really bad pitch. [North Carolina] threw him a good one, and he hammered it hard to left field.”

That victory gave Valley all the confidence it needed for the game that followed less than two hours later.

“It felt good when we won the first game,” Yarbrough said. “We had a vibe going in the second game that we won.”

After giving up the first run in the title game in the bottom of the first inning, Valley buckled down and scored eight unanswered runs through the fourth inning through a series of walks. Yarbrough, Isaiah Gray, Brayden Bunn and Hunter Phillips had the four hits for Valley in the championship victory. Gray had a standout day in particular for Valley at the plate on Wednesday.

“Isaiah has probably come further, as far as hitting a baseball, these last couple of months than anybody,” Coach Andrews said. “Isaiah just hasn’t played as much baseball as the other kids, so it was kind of all new to him to have to get out there to work four, five days a week at trying to hit. He did it. He kept working and working, and I’ll you that he’s had some big hits for us.”

There was no Most Valuable Player award presented at the tournament. Coach Andrews said that he believed all of his players were MVPs.

“They played around 18 games altogether as a team,” Coach Andrews said. “At some point in time, every one of these kids had to step up and do something to help this team. At some point in time, everyone contributed to what we accomplished today. I think that all of the kids know that I love them, and all the kids had to play ball. Every one of them.”

The Robesonian sports editor Jonathan Bym contributed to this story.