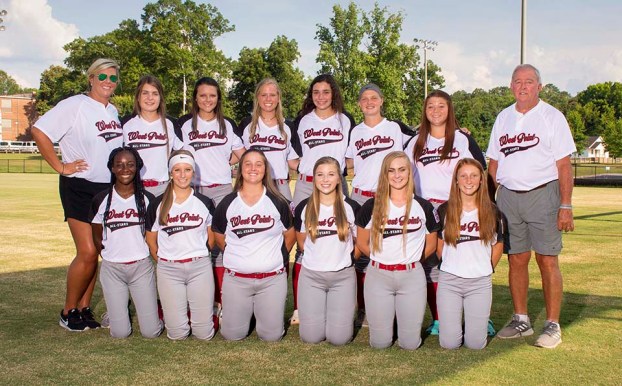 West Point 16 and under, 12 and under softball teams begin play in state tournments

AUGUSTA — A pair of West Point softball teams began play in the state bracket this past weekend.

The defending state champion 16 and under team defeated Columbus American LL Cougars 18-8 in its opening game on Sunday after receiving a first-round bye.

West Point LL Senior League smacked one home run on the day, when Bryant went for the long ball in the third inning.

West Point LL Senior League lost the second game in the bracket on Monday night  7-5, but the team is expected to return to action on Tuesday in the double-elimination bracket.

After losing the first game of the tournament to Oconee 13-11, the 12 and under softball all-stars defeated Bartow County 11-1 on Sunday.

West Point LL 12U All-Stars put up ten runs in the first inning of the victory. The offensive onslaught came from doubles by Carson Cooper, Kali Harper, Hadilee Arnold, and Cooper, a walk by Kaitlyn Smalley, a hit by pitch RBI and a single by Gabby Coleman.

ATLANTA — The Atlanta Braves (54-37) headed into the All-Star Break carrying a two-month-long streak. After defeating the Miami Marlins... read more