All-Stars to have parade at Valley Sportsplex 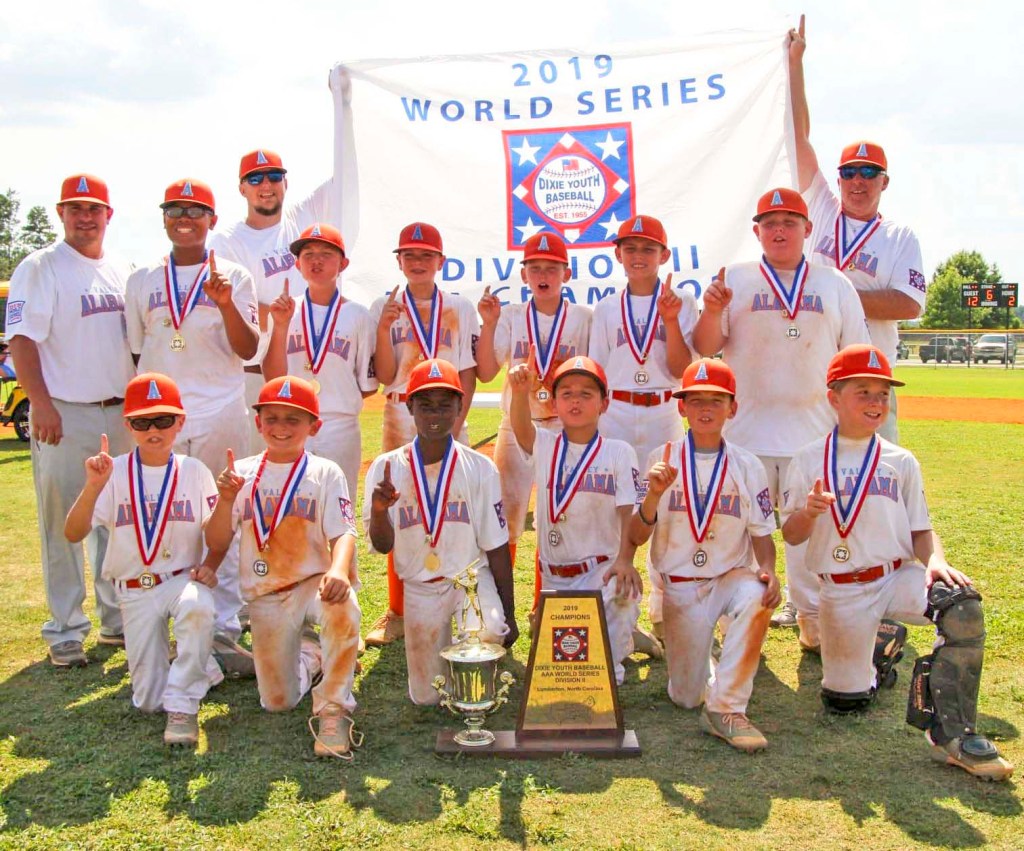 The Valley 9- and 10-year-old all starts raise the Dixie Youth Baseball champion banner and while posing for a photo with the World Series trophy Wednesday afternoon in Lumberton, North Carolina.

VALLEY — At 6 p.m. on Wednesday, Aug. 14 Valley Parks and Recreation will be hosting a celebration for the 9 & 10-year-old All Stars that won the Dixie Youth World Series.

The parade will start with a parade at the Sportsplex and conclude with a program inside the Community Center’s Community Room. Valley Parks & Recreation Director Laurie Blount said that this will be a special event and that she’d like to see a big crowd in attendance.

The team won the World Series in late July with a 12-2 victory over Virginia.

In other business at the Monday meeting of the city council, it was announced that the city has a new solid waste provider. Mr. Greenjeans, who’s been the provider for the past 16 years, has been sold to AmWaste LLC of Sylvan Springs, near Birmingham. AmWay representatives Chip Russell and Frank Arnold were there to discuss the acquisition. AmWaste, Russell said, has contracts in LaGrange, Chambers and Randolph counties and many other areas in Alabama.

“We can handle anything when it comes to waste,” Russell said. “We have assumed Mr. Greenjeans’ contractual obligations.”

Allen Hunt, president of Mr. Greenjeans, and his brother, David Hunt, were present at the meeting.

“We’ve been with the city since 2003,” Allen Hunt said. “It’s kind of like losing part of the family. We feel good about AmWay, and the job they will do. They are good people like us. It’s important to us that they will continue to do a good job in Valley, and we think they will.”

Hunt thanked Mayor Riley and city officials in having been good to work with for 16 years.

“I want to thank all the city officials we have dealt with since we’ve been here,” Hunt said. “We have tried to do a good job, and we appreciate their support.”

The council unanimously backed Mayor Riley’s recommendation to award a contract to build a booster pump station on the Burney property on the city’s west side. A contract in the amount of $646,500 has been awarded to Schmidt Environmental Construction in Auburn.

The above-ground water storage tank and the booster pump off 55th Street should greatly improve water pressure in the city’s industrial park.

The mayor appointed council members Jim Clark, Randall Maddux and Henry Cooper to a committee to study whether the city needs a new gun ordinance. This follows a recent council session at which complaints were aired about people target practicing in the city,

The council approved a seven-item consent agenda. Four of the items were to confirm the costs of abatements at 1034 Carter Lane, 1804 55th Street, 2405 31st Street and 5507 21st Avenue. Other consent agenda items confirmed the city’s participation in the 2020 Census Partnership and the countywide Complete Census Count Committee.

The council suspended the rules and adopted on a first reading the sale of some city-owned property to Dorothy R. Phillips in the amount of $500. The land is east of Truitt Street and northwest of Larry Lane.