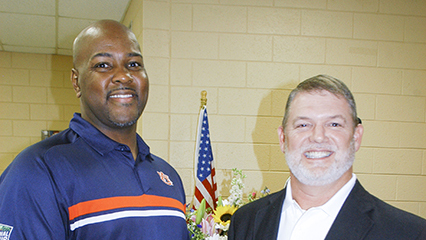 Bowman said it was humbling for him to be asked to speak to a large gathering inside the school’s lunchroom.

“It touches my heart to see what you all are doing here at this school,” he said.

Valley Haven is the local education center for adults with learning disabilities and children with developmental delays.

As a basketball coach, Bowman said it was his job to turn obstacles into stepping stones.

“I got into coaching because I wanted to help young men and to touch their lives,” he said. “It has been very fulfilling for me, and I want to help them in any way I can.”

Bowman grew up in Newark, New Jersey and said that he’s still getting used to the hot summers in the deep south.

“The springs and falls are okay, but the summers are something else,” he said to some scattered laughter.

Bowman said he felt very fortunate to be at a school like Auburn University.

“I thank Bruce Pearl for hiring me,” he said. “I work with some great people. The first team I helped coach went 1-30. It’s quite a contrast to go through that and be on a staff that wins the SEC championship tournament and advances to the Final Four.”

Auburn’s loss to Virginia in the national semifinals was heartbreaking, but Bowman said he was most proud of the way Coach Pearl and the players dealt with it.

“I don’t think they could have handled it any better than they did,” he said.

Bowman was on paid leave during that tournament run. His absence was due to an investigation that was going on in connection to an alleged bribery scheme that had taken place at the University of Pennsylvania when he was an assistant there in 2015. Parents of a Penn student reportedly offered to pay coaches for their son to be on the Quakers basketball roster. The school’s former head coach, Jerome Allen, pleaded guilty to the charges.

Following an exhaustive investigation, Bowman was reinstated to the Auburn staff.

Bowman was hired by Pearl on July 2018. He was at Penn for the previous six years and had been instrumental in the recruitment of some of the team’s best players.

“When you are hiring a staff, it’s all about surrounding yourself with people better than you,” Pearl said when he hired Bowman. “Who can help these kids realize their full potential on and off the court? Who do I want to walk into a living room with and say to a parent that these are the men I want to surround your son with?”

“Ira Bowman is a former Ivy League Player of the Year, a self-made NBA player, a great father and a true role model. Even though he is from the east, I think he fits the profile of an Auburn man to a T.”

Bowman played two years at Penn, the 1994-95 and 1995-96 seasons, after transferring from Providence College. In his first year with the Quakers, Penn went 22-6 overall and 14-0 in Ivy League play en route to its third straight Ancient Eight title. Bowman was named to the All-Ivy second-team that season. As a senior, Bowman was the Ivy League Player of the Year and First-Team All-Philadelphia Big 5 as he led the Quakers to a 17-10 record that included a 10-2 mark in Ivy League play.

Following his playing days with the Quakers, Bowman enjoyed a professional playing career that included stints with the NBA’s Philadelphia 76’ers and the Atlanta Hawks. He also played overseas in Italy and Australia as well as in the Continental Basketball Association (CBA).