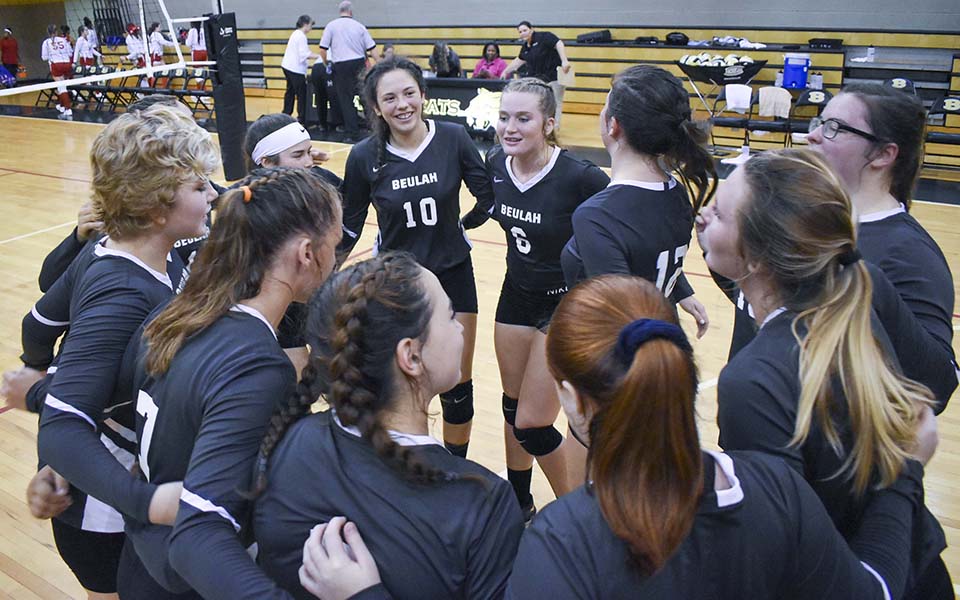 Rashad Milligan | Times-News huddle up: The Beulah varsity volleyball team gathers around one another on the court after defeating Wadley in straight sets on Tuesday night.

BEULAH  — The Beulah varsity volleyball got off to a nearly perfect start to the season on Tuesday night.

“It felt great,” Beulah senior middle hitter Camryn Harris said. “We weren’t expecting it to be like this at all, but it was great.”

The Bulldogs took advantage early in the first set, getting out to a 9-5 lead.

“I think once they settled in, got their nerves out and saw that they could play with the team, they felt like ‘oh, we got this,’” Beulah head volleyball coach Allison Aikens said.

Wadley sophomore Cailin Birdsong paced the Bulldogs after Beulah’s run by serving a pair of aces to keep the visitors in the match.

Beulah senior Danielle Williams eventually won the first set for the Bobcats, much to the delight of a decent-sized crowd in the lower bowl filled with fellow Beulah student-athletes and supporters.

Beulah also took an early lead in set two, but Wadley was beginning to build the momentum back after winning two passionate points on plays that went back-and-forth.

Harris continued to make pivotal blocks at the net as the Bobcats steadily held on to the lead to take the second set.

The senior trio of Harris, Williams and Sydney Knight continued to lead Beulah in the final set of the night with the help of some of the younger players.

“[Harris] had some good blocks at the net and that fired us up,” Aikens said. “Danielle and Sydney got some great serves, and once we got that first one, then it snow-balled and rolled through.”

All of the momentum and confidence was on the Bobcats’ side in the final set, as Beulah didn’t surrender the lead once. Wadley made one final push by scoring two consecutive points once the Bobcats reached the 21-point mark, but Beulah eventually sealed the deal and claimed its first victory of the season.

Beulah is only returning four varsity members on the team this season and three junior varsity players who were moved up at the end of last season. The Bobcats have added Brandy Phillips, who didn’t play volleyball last season.

“The seniors have played a huge role with their leadership,” Aikens said. “I’m looking to them for the rest of the season to lead us and get us through because we’re expecting to get to Montgomery and do a little bit more [than what we did last season].”

On Sept. 5, Beulah will play in a tri-match against Notasulga and LaFayette.