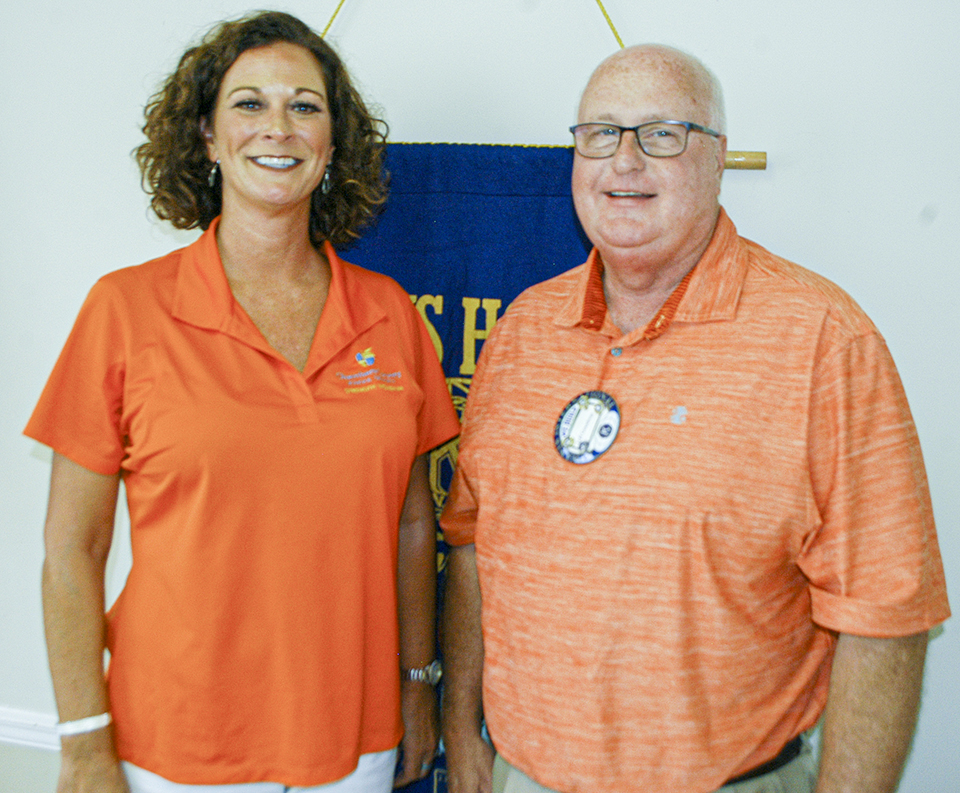 Chambers County Superintendent of Schools Dr. Kelli Hodge, left, was the guest speaker at Wednesday’s meeting of the Kiwanis Club of Valley. She talked about the importance of relationship building among teachers and staff with students and their families. Right is Jeff Goodwin, program chairman. -- Wayne Clark

VALLEY — Dr. Kelli Hodge is starting her ninth year as the superintendent of the Chambers County School District.

She was the guest speaker at Wednesday’s noon hour meeting of the Kiwanis Club of Valley, and she talked about the importance of building relationships between teachers, school officials, students and their parents.

It’s a lesson that’s been learned the hard way, in part due to the school officials struggling to meet state expectations in regard to test scores.

“A couple of years ago we knew that a state report card would be coming out,” Hodge said. “We were working very hard on our academic indicators and were optimistic we’d get good marks for that. Two weeks before the deadline they took it out and didn’t tell us about it. They replaced it with chronic absenteeism, and they had collected data on it without telling us.”

Chambers County did not score well and flawed data had much to do with it. Any student who had been absent for 15 or more days — even if those absences had been excused — would impact the way the system was rated. It didn’t matter if the student had been in the hospital or if their family was picking up the pieces after losing their home to fire.

After that one bad year, school officials knew what expectations the state was looking for.

“We knew we had to cut out exemptions,” Hodge said. “We got some at-risk funds. That let us hire Loon Davidson, a Chambers County Sheriff’s Office deputy, to be our attendance officer. That helped us drop from 17 percent to just over 13 percent in one year. That’s a big difference.”

“He was perfect for the job,” she said. “He didn’t try to intimidate them by getting across that he had a gun and a badge. He takes kids under his arm. He’s very proactive in his approach. He can identify kids who are having some kind of trouble at home and works with them before they start missing school.”

Relationship building is making a difference for the school system, Hodge said. “Research shows that if there is one adult in the building a student trusts and can confide in, it greatly improves the chances that they will graduate,” she said.

Not every student is interested in sports, band or clubs but will get involved in other activities if they are available. The problem is to find something that interests them.

“We have different kinds of clubs,” Hodge said. “We have a club for those who are into LEGO and one who are interested in taking guitar lessons. They wrote a song, recorded it, made a music video and put it on Youtube. Doing this builds relationships and helps with leadership skills.”

Dr. Hodge said it’s important to have teachers who are attuned to their student’s needs and know what’s going on in their life. She cited the example of a young girl who kept falling asleep in class. Some teachers felt it was a matter of her not being engaged and not interested in learning. One teacher who knew what was going on in her family knew why she was falling asleep. Her mother had cancer, and she was staying up most of the night taking care of her needs at home.

“One teacher knew that because she’d built a relationship with the girl that was based on trust,” Dr. Hodge said. “She would talk to her about her problems.”

Some schools within the district are doing innovative things in the way of relationship building. Teachers at Fairfax Elementary School, for example, have visited the renowned Ron Clark Academy in downtown Atlanta and are implementing some of what they’ve learned there.

“They have a house system that’s like something out of Harry Potter, and the kids love it,” Hodge said.

The students belong to one of four houses, and they compete against the other teams throughout the year.

“If someone is polite to a visitor and direct them to where they need to go a teacher who sees it will give their house a point,” Hodge said. “If someone acts on their own initiative to pick up trash on the school campus, they will get a point for their house.”

“We borrow ideas wherever we can get them,” she said. “We want to do what works in helping our students have the best educational experience they can. We are open to ideas from anyone and everyone.”

“We now have three of them in Valley,” Hodge said. “We have one in LaFayette, and the Chambers County Commission is allowing us a deputy to swing between Huguley and Five Points. The officers we have are great, and the students like them.”

Hodge said she was most pleased with what Chambers County Career Tech was bringing to the system.

“It’s not what vo tech used to be,” she said. “There is something there now for everyone. Some of the top students in our district for the past few years have come from Career Tech. They have gotten scholarships to schools like Auburn and Georgia Tech.”

A member of the club asked Hodge where things stood with consolidation.

“We are working on the money side of it,” she said. “I have vowed not to ask for a tax increase, especially with a gas tax increase on the way. We need to do the best we can with the finances that are available.”

Hodge said the school district had been paying off some debt in recent years. A school consolidated plan could cost in the range of $70 million to $80 million. That’s around $30 million more than what can be done without a tax increase.

Hodge said she has been encouraged by talks she’s had with state officials. They tend to favor consolidation for systems like Chambers County.

The volunteer work being done in the system by MEN, or Mentoring, Engaging and Ministering, has been very good, Dr. Hodge said.

“It’s a good partnership, and we are grateful for it. We appreciate the help we’ve been getting from Karanja Story, John Samanie and others. Some local churches have prayer walks at the schools in the evenings. Despite what some people may think, there’s no law against praying for the schools. Believe me, we will accept your prayers at any time. We welcome them.”