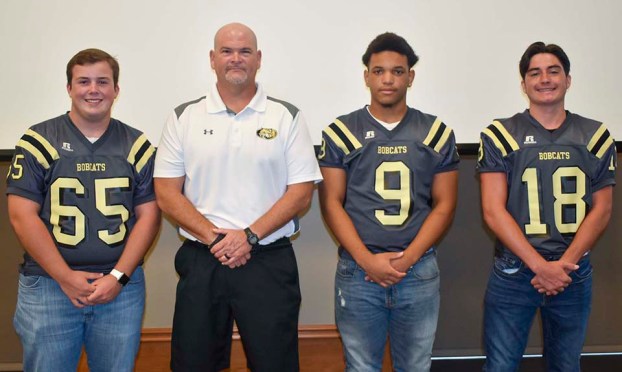 OPELIKA — Beulah’s preseason hopes are higher than ever after enjoying a historic 2018 campaign.

“We’ve had a hard, long summer,” Beulah defensive coordinator Stan Pepper said. “Everybody’s excited because you’re undefeated, everyone’s excited because you have the chance to win a state championship. That’s something that we can talk about at Beulah for the first time in a long time. We have a chance to win a state championship.”

The Bobcats finished last season with an 8-3 record, clinching the program’s first playoff berth in 11 years and hosting the first playoff game since 1995.

“[He’s] one of the best running backs in the state, one of the best running backs that we’ve ever had at Beulah by far,” Pepper said. “He’ll be the first one to tell you that’s because the players that are around him. That’s one thing about our team, our team is selfless. They’re all about teammates, they’re all about doing what’s best for the team. We don’t have anyone on the team who’s ‘me, me, me, I, I, I.’ If they are, they don’t play.”

This is the Bobcats’ first season under new head coach Matt Johnson, who is shifting into the role from being a longtime offensive coordinator at the school.

“We’re extremely happy for him to have gotten this job,” Pepper said. “We’re looking forward to many years of someone wanting to be at Beulah, stay at Beulah and building a program to where we’re here in the future.”

Pepper later said that the internal hire kept the turnover shock to a minimum for the players. The team’s workouts, offense and defense have all remained the same.

The seniors echoed the defensive coordinator’s optimism on the team’s expectations this season.

“We’re just as good this year, if not better than we were last year,” Coleman said. “We have a solid group of seniors again this year and we’re going to compare very well. It’s the same offense, same defense. We really know the program a lot better now.”

The offensive line is the unit that Johnson, who missed the media day due to a prior obligation, has been very big on all offseason.

“It’s not just because we’re friends, we’re family,” Buffington said of the unit’s chemistry. “We hang out a lot, we stay together for most of the time. We work out together, pretty much everything, we practice together. We all work hard.”

Beulah’s first game of the season is on Aug. 23 at home against Loachapoka.

LUMBERTON, N.C. — The Dadeville 11 and 12-year-old baseball all-stars wrapped up their season at the Dixie Youth World Series... read more