VALLEY — Anyone who has lived in Chambers County knows the importance of the Valley-Lanett football rivalry game, which determines bragging right for the entire year.

The schools sit only five miles apart, and many of the former athletes who played in the game said it’s built around good-natured dislike, just like any good football rivalry.

“It’s a rivalry man,” said 2005 Valley graduate and former running back Torrance Rudd. “From being up the street, it was, ‘you’re black and gold, we’re orange and blue, and we have a problem because we’re going against each other. That’s all I can say about Valley and Lanett is ‘hey, we don’t like y’all.’”

Friday night marks the 88th meeting all-time between the Panthers and Rams, with Valley having the advantage with a 54-31-2 record in the head-to-head series.

The first game kicked off in 1927 when the Panthers shut out the Rams 27-0. The two schools have faced each other every year since then, except 1934 through 1938 and 2012 through 2013, according to the Alabama High School Football Historical Society (AHSFHS).

Lanett Head Coach Clifford Story Jr. said the Panthers didn’t schedule the 5A Rams in 2012 and 2013 due to the risk of injury for then-2A Lanett. Story said there were Panthers who suffered season-ending injuries in the 2010 and 2011 games.

Beyond the field are many underlying stories of the two schools, which are only separated by five miles and a bridge over the Interstate.

“I’ve been involved with football on many different levels and the Lanett/Valley rivalry is still the most memorable that I’ve been a part of,” said Mark Hill, a 1995 Lanett graduate and the current University of Kentucky strength and conditioning coach.

Here are some of the games that former football players from the rivalry remember the most:

This fall marked one of two seasons ever where the Rams and Panthers played on a Monday night. The other year was 1930, according to AHSFHS. In 1977, both teams were 3A programs who missed the playoffs. The game was postponed because of a bad rainstorm the previous weekend.

“Lanett-Valley week was an experience,” Lanett 1978 graduate and former left tackle and defensive end Randy Parmer said. “The build-up and anticipation rivaled any college match-up of the day. At the mill, at church, at the grocery store, everyone was talking about the game. The VT-N posted articles listing the winners of games since the beginning. At Lanett, every hall in the school was decorated. The pep rallies were wild. The communities were pumped.”

Parmer played in the 1975, 1976 and 1977 Valley Lanett games, and calls himself a proud “Panther for life.” He was on the 1977 team that featured brothers Greg and Billy Blanks. Their older brother Tommy presented the trophy to them after defeating Valley on that Monday night in 1977.

“Football is a family tradition then and now,” Parmer said. “Coach Story and [his] family [are a] perfect example.” 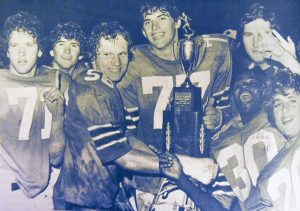 Valley scored midway through the fourth quarter to cut Lanett’s lead to one after missing the extra point. The Rams blocked a Lanett punt with under two minutes remaining in the game and kicked a field goal to take a 9-7 lead with 30 seconds remaining. On the ensuing kickoff, a Lanett’s kick returner fumbled the ball, which was recovered and returned for a touchdown by Ram Vonza Holloway as time expired.

The win gave Valley a 9-1 record that fall, but due to the only loss coming against Central-Phenix City, the Rams missed the playoffs. The season-finale against Lanett was considered Valley’s “playoff game” for the year. Tyrone Ramsey and Tymichael Howell won MVP honors for Valley after the game.

Coached by Arthur Bennett, Lanett went on to host Shelby County in the 4A state playoffs that next week, eventually advancing to the state semifinals, according to AHSFHS.

The Rams pulled out the victory in rainy conditions. Russell Moore, a Valley 1994 graduate and former offensive tackle, said all of the hype leading into the game was focused on Lanett.

“I specifically remember one of their middle linebackers,” Moore said of that Lanett roster. “He had a scholarship to attend the University of Miami. I thought this was going to be a challenge. When I stepped onto the field for that first play, I was anxious to even get to him thinking a player like this would be tough to handle. However, he was almost passive in his approach. I am not sure if the rain and mud made him unsettled, but the team had their way against Lanett at every point that night.”

The win solidified a 2-1 career record against Lanett for Moore.

“I remember less about the games [and more] about all the hype and special feeling this week had,” Moore wrote, via email, of game week against Lanett. “It was the pep rally, the bonfire, the extra crispness at football. Sitting here typing this, I can still feel the emotion coursing through my body. You did not need any special incentives to get ready to play against Lanett.  I felt that Lanett had for the longest time considered itself a step above Valley. They had a city school system. They had been a city for almost 100 years by that point, while Valley had only been a city for about 10 years. I feel like we had something to prove every time we went out there.”

“They were big and fast,” Valley graduate, and current Lanett Lt. Willie Brown said. “It was a tremendous crowd, and we knew we were the underdogs going in. Our offense just couldn’t get anything moving against that defense. We couldn’t even score. At the end of the game, a Lanett player was telling us to come back and play them when we had a better team.”

The Panthers went on to play in the state semifinals before losing to eventual state champion T.R. Miller.

“In my opinion, that was the second most talented team in Lanett history,” Brown said. “Only the 2017 team was better.”

The Rams returned the next season a year older and motivated, remembering what the Lanett player told them walking off the field in 1994.

On rivalry week, the Rams already won the area championship, but their eyes were set on defeating the Panthers.

“We felt we had let the community down, the school, the coaches, and former players down by losing 21-0 the previous year in 1994,” Brown said. “The atmosphere was electric in pregame. Our team was focused and ready to play. In pregame, Coach Robert Maddux gave a great pregame speech, he reminded us what the Lanett player had told us the previous year walking off the field. We were charged and beyond pumped. Each player in that locker-room knew Lanett had no chance that night … every senior, whether they play for Valley or Lanett, wants to win the game their senior year. Those are bragging rights you hold on forever.”

In the final Valley varsity game that was played behind Valley High School, a matchup between two high-powered offenses turned out to be a defensive showcase.

Fans of both teams stood for the majority of the night in anticipation of which side would pull away first.

In the final minute of the ballgame, Valley quarterback Clay Kelley threw a touchdown pass to a corner of the end zone to Terrance E. Brown over two Lanett defenders.

“It was very intense,” 2003 Valley graduate and former running back Tonarius Gooden said. “The crowd went wild, and the players were very happy. It was a good game.”

Gooden said that his nephew is 10-years-old and currently goes to school in the Lanett City Schools System.

“My family has always gone to Valley,” he said. “When [my nephew] starts playing, I’m still going to have to cheer for Valley. It’s not going to change a thing.” 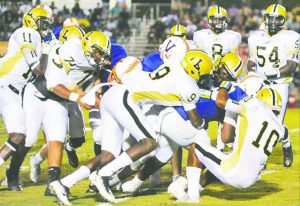 The Valley and Lanett rivalry included pranks and acts of vandalism during some seasons in the early 2000s.

“Some guys from our school went over there and did some stuff,” Rudd said. “I can’t remember, you know. I was a good kid. That’s my story, and I’m sticking to it.”

Players from both schools rolled the opposing team’s houses and schools with toilet paper.

“You had guys who had each other’s cell phone numbers, so via text message, in the McDonald’s parking lot, it was crazy,” Rudd said. “Once we got to the field, we just handled business.”

Former Valley standout athlete Horatious Jennings transferred to Lanett that season. The first play of the game, Jennings ran for 35 yards. Rudd said the Valley defense adjusted after the play and contained Jennings for the rest of the night.

“This game meant something different because they had one of our players,” Rudd said. “The atmosphere was crazy, it was thicker than it had been in prior years.”

This was the first season in three years that the rivalry resumed.

“It was the last time I ever played in Lanett, it was my last first game,” 2015 Valley graduate and former kicker Bo Colley said. “It was also bittersweet, I wanted to keep playing. I wanted to play them every year, but time doesn’t allow that. It was awesome, and I enjoyed every minute of it.”

Colley is now a local college student and aspiring politician. In 2018, he campaigned for Sen. Randy Price (R- Lee County) at the Valley and Lanett game.

“It’s a beautiful game,” Colley said. “Great football teams who come together to enjoy football. I want to wish both Valley and Lanett a good year, but I hope Valley starts 1-0.” 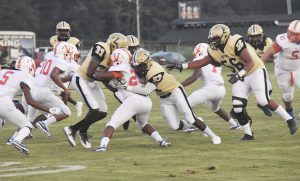 Today, both Story and Valley head football coach Buster Daniel admitted that the rivalry isn’t a strong as it once was, but it’s still a game the athletes take pride in.

This is a game that Lanett senior running back B.J. Smith said he wanted to win after falling to the Rams on the opening week of last season. Smith attended Valley High School for the first two and a half years of high school. Friday night marks his first game back in Rams Stadium since transferring.

“I told some of my teammates about two weeks ago that I’m ready,” Smith said. “That loss after transferring last year hit me very hard, so I have to give it all that I have.”

“We hang out with them, we talk to them, but on the field, if we’re talking about football, it’s an entirely different story. It’s a big rivalry.”