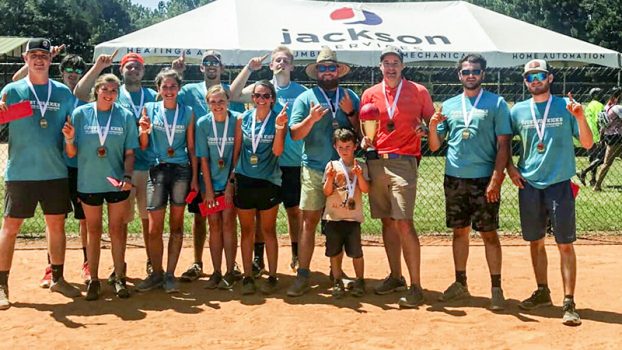 This kickball tournament has taken place every August for the past three years. Michelle Thompson, executive director for the First Choice Women’s center, said several teams have competed all three years. However, the amount of community participation has increased every year.

“We used to have a 5k run, but then it was decided that we wanted something a little different,” Thompson said. “We figured people would be willing to participate in a friendly competition while also supporting a good cause in their community, which is why we decided on kickball.”

First Choice Women’s Center is a nonprofit organization whose mission is to provide care and guidance to women who are experiencing an unplanned pregnancy.

“We provide compassion, hope, and help for women who are facing an unplanned pregnancy,” Thompson said. “We are there for women so they are not alone.”

Kaitlann Jones, a competitor at the kickball tournament, said the reason she was competing was to support the cause.

“I wanted to compete to raise money for the pregnancy center,” she said.

‘Electric Jesus’ to film in Valley on Sept. 3

VALLEY — The magic of filmmaking will make its way to Valley on Tuesday, Sept. 3, according to a writer/director... read more