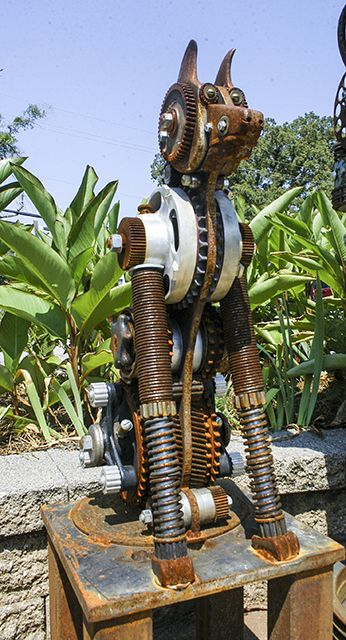 The dog on permanent display at the Bradshaw-Chambers County Library flagpole is going to be called Scrappy. The name was chosen over Milly and shaw-MUTT in a vote taken last Friday by local children taking part in the summer reading program. -- Wayne Clark

He’s going to be called Scrappy, a good name for a canine, especially one made from scrap parts from the local mills.

The name was chosen by children taking part in last Friday’s awards day program at Bradshaw-Chambers County Library. The choice of 208 voters, “Scrappy” won out over “Milly,” with 141 votes and “shaw-MUTT” with 83.

“It’s a fitting name. We like it,” Librarian Mary Hamilton said. “We would have been okay with one of the other names, too, had they been picked.”

Sarge is a seven-foot-tall saluting soldier who stands beside the flagpole on the library grounds. Sculptor Chuck Moore chose that name and was open to suggestions for the dog’s name. The library staff decided to let the kids decide from among three proposed names.

Moore has recently been working on another Sarge. This one is taller than the first one. He has to stand on a ladder while working on it.

He is undecided what he will do with it. It would certainly be a nice addition to any public place with a flagpole and has Old Glory on display.

Several boys came by the library on Thursday to pick up the awards they had earned through their participation in the summer reading program. They were out of town on Friday participating in the Dixie Youth World Series in Lumberton, North Carolina. Valley’s 9 and 10-year-old All-Stars won the Dixie Youth World Series title Wednesday. The boys on that team who took part in the summer reading program now have a medallion and certificate to go along with the World Series title.