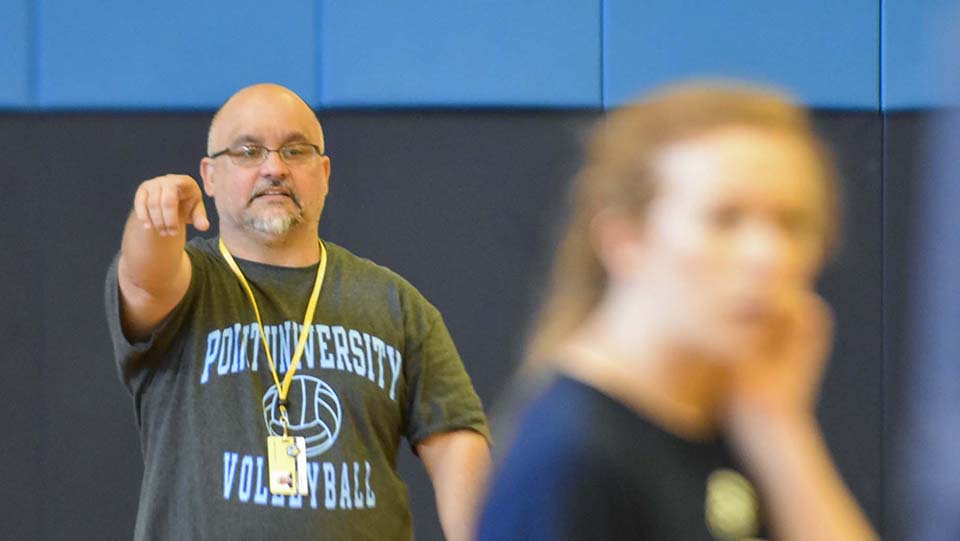 WEST POINT — The Point University volleyball program has raised the standard in each of the last three years.

In both the 2017 and 2018 season, the Skyhawks set team records for most wins in a year since the program’s first season in 2012. The team also witnessed two standout seasons from arguably its best player ever in Tatiana Dale, who was also named the first NAIA Volleyball All-American from Point University.

Now, with Dale graduated and former head coach Amanda Jones accepted a job at NCAA Division II University of West Florida, the team looks to continue to push the momentum in the right direction.

“I know the girls are hungry,” new Point University volleyball head coach Joe Herrera said. “They fell short last season in a five-set match. They want to get back, and now with the Appalachian Athletic Conference (AAC) adding a new bid for us, it gives us a better chance of accomplishing our goal of getting to nationals. They were two points away from reaching that goal last season, so they want to work and they’re a great group of women. They love each other and they love to work.”

Herrera is a longtime prep sports coach and has served as the head volleyball coach at Trinity Christian School in Sharpsburg, Georgia. In four seasons at Trinity, he had a 98-33 record.

Among the 14 returning players and two redshirts from 2018 returning are seniors Julia Felix, Charlotte Havrisik, Tessa Burns and sophomore Rachel Ellis. Felix was named to the 2018 All-AAC first team, while Ellis was named to the All-AAC second team and all-freshmen team.

“We want to continue doing well in the conference [this season], and maybe set another record for the school record,” Felix said. “The overall goal for me, my senior year, is to go out with a bang.”

Felix said that she respected how Herrera came into the position this past spring and continue to push the recent winning culture of the program.

The Skyhawks are 2-3 entering Tuesday on the young 2019 season. This past weekend, Point University played at the Vette City Volleyball Classic. The team lost to No. 9 Lindsey Wilson College, Loyola University and RV Campbellsville University.

“We played some tough competition,” Felix said of the tournament. “We made some errors on our part, and I think that we’re having a few growing pains, but we’re working those out. We’re getting better as the days go by and I think that’s going to set the tone for the rest of our season. We’re going to continue to work hard, even when we’re not doing so well.”

This season’s roster features senior newcomer Faith Pearson. Pearson is an outside hitter transfer from the University of West Georgia and was a 2016 graduate of Harris County High School.

“She’s going to be a big weapon because we lost Tatiana, she’s going to give us another presence on the outside,” Herrera said. “She gives us more depth in our hitting.”

The Skyhawks are also bringing in six freshmen this season.

After traveling up to Marietta, Georgia to play Life University on Tuesday evening, Point is playing in the Big Easy Blastoff in New Orleans, Louisiana this weekend.

“It’s going to be an exciting season with lots of fast, quick, energetic play,” Herrera said. “We can use our support, especially when we play our big-time rival, Reinhardt. I’d love to see the community in here, supporting these girls because they’d love to have supporters in the bleachers screaming for them.”