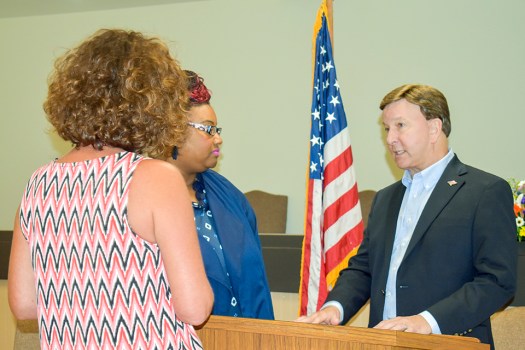 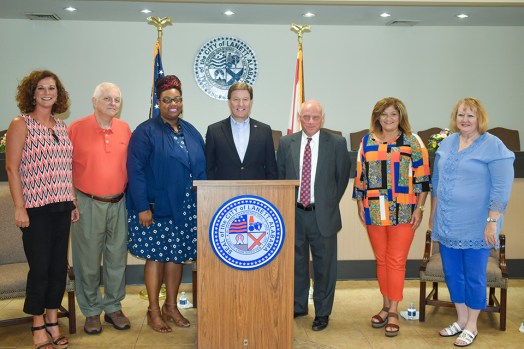 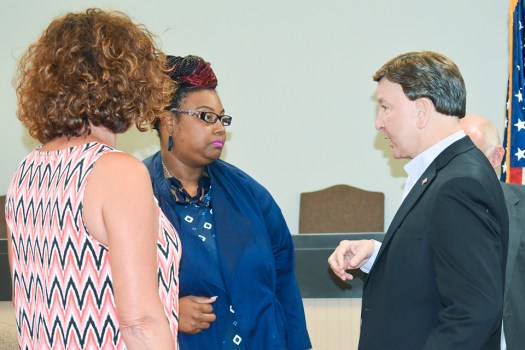 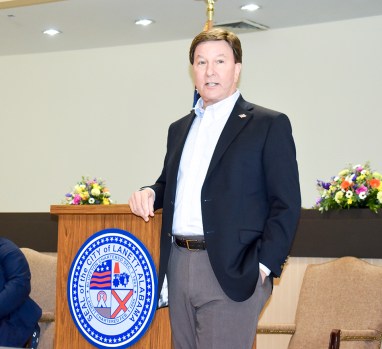 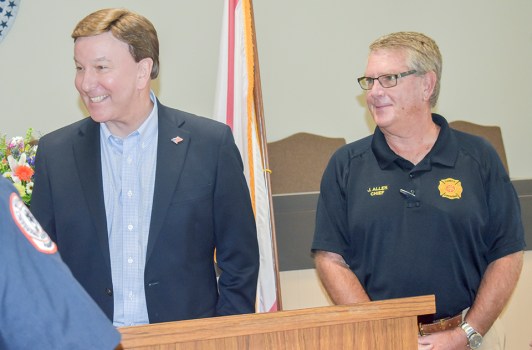 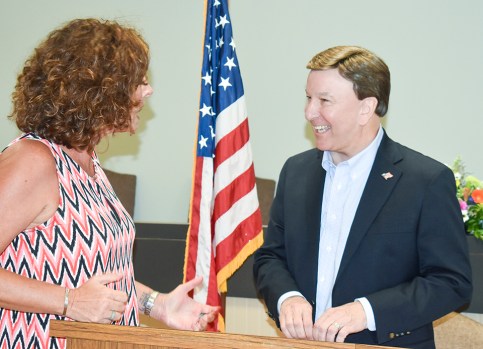 LANETT — U.S. Congressman Mike Rogers stopped by Lanett City Hall Thursday to meet with constituents and give an update about what’s going on in Washington and what to expect after Labor Day.

Rogers, R-Alabama, spent Wednesday morning in Opelika touring facilities and then visited the Lanett airport.At city hall, Rogers talked about some of Congress’ accomplishments before breaking for the month of August. He called the first six months of the Congressional session unproductive, citing the divisiveness of the two chambers as the reason why.

However, he said Congress was able to get a two-year budget deal passed, which is traditionally one of the hardest votes.

“We have big priority differences,” Rogers said. “The Republicans want to put a lot of money in national security and defense and the Democrats want to be put a lot more money into public education and healthcare.”

However, the significance of the two-year budget is that it pushes the next vote past the general election in 2020, avoiding a potential government shutdown.

Rogers touted the passing of the National Defense Authorization Act, which he says is the bill that tells the Pentagon in Washington what it can and can’t do in the next year. He said it is the only piece of legislation that has passed Congress on time for 58 years.

“What that tells you is that we have a lot of differences, but when it comes to the military, we find a way to tell them we are behind them, and we support them no matter what our party differences are,” he said.

When Congress gets back to Washington in September, Rogers said the Senate and House will start a conference committee to work out the differences between the House and Senate versions of the bill. However, he says it won’t be a complicated process.

Next, Rogers warned his constituents there will be many more votes for starting the impeachment process of President Donald Trump.

He said there were many Democrats who voted against a recent push to start impeachment proceedings and were met with outrage from constituents when they went back to their districts. Additionally, those same Democrats, Rogers said, could feel pressured they will face primary opposition if they don’t vote for impeachment.

He said about 10 more Democrats came back to Washington saying they will vote for impeachment.

“None of them are going pass,” Rogers said. “And even if they do, the Republican-controlled Senate won’t even take them up.”

The Congressman also talked about his hopes to pass an infrastructure bill that deals with broken bridges and roads, as well as providing faster internet to rural areas.

Rogers said both political parties want a bill done but those on the left have been hesitant to come around because of their animosity toward Trump.

“We had a lot of people on both sides of the aisle who wanted it but since President Trump has been having a good two years, the Democrats didn’t want him to get any more wins,” he said. “Now that the Democrats control the House, they can take partial credit for it. So, we have a real chance of getting it done.”

Rogers said the biggest problem is paying for the bill. He said Trump has talked about a $1 trillion infrastructure bill, but the government can’t borrow that much money. Rogers also mentioned Trump’s desire for an 80/20 match, with the public paying the latter.

“We are going to have to get him to come around,” Rogers said of Trump. “That is the way he does everything. He starts with an extreme position, but then he falls back to a reasonable position.”

He said if an infrastructure bill isn’t done by Christmas, it likely isn’t going to happen because after the new year, the election cycle heats up with primary elections just months away.

Lastly, Rogers commented on the proposed Space Force. He said he chaired the committee of the armed services that oversees missile and nuclear systems in space.

Rogers said that whenever a person pays for gas at a pump with a credit card or makes a transaction at a bank, they are using a satellite.

“Most people have no idea how much they are using satellites,” he said. “Through the past 15 years, we have become heavily dependent on satellites to fight and win wars. We have satellites that look just for nuclear launches and to notify when they are launched so we can turn on radars and shoot them down.”

Rogers said that Russia and China also learned how dependent the U.S. has become on satellites.

“They also learned they couldn’t defeat us in a tactical fight because of America’s size,” he said. “However, if they could figure out a way to hamstring us, then they would have a chance.”

He said the armed services committee voted unanimously to create the space force.

He said the U.S. would take existing space professionals, mostly from the U.S. Air Force, and some of the Army and Navy, and set them aside in their own branch of the military.