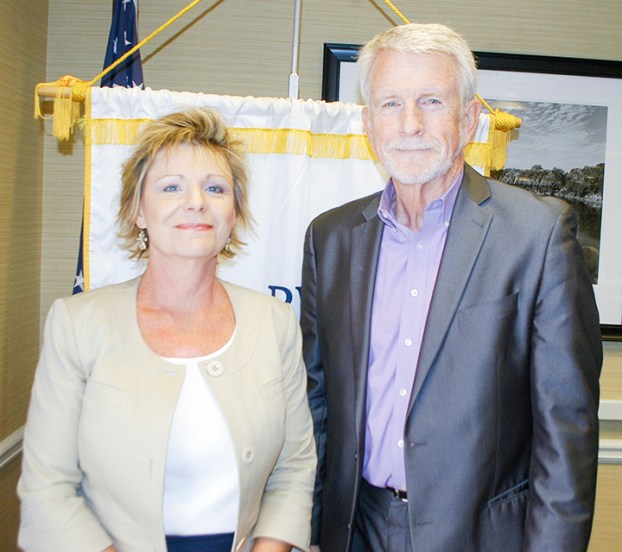 Springwood head of school talks about changes in education

McCown comes to Springwood from the Atlanta area, where he was the associate head of school at Kings Ridge Christian School, an academically-focused independent school that experienced significant growth under his leadership.

McCown told the Rotarians that his grandmother had been born in the horse and buggy era but lived to see men walk on the moon. That was some amazing change over the course of one generation, but it’s nothing compared to what’s taking place today. “There’s more technology in a smartphone than what it took to get us to the moon,” he said.

Information is increasing at an almost unfathomable pace. In a video presentation made available by McCown, the point was made that it took more than 400 years for information to double at one point. This spanned the period from Columbus’ discovery of the New World in 1492 to the start of World War I in 1914.

Since 2000, information has been doubling every month and, in a few years, will double every second, he said.

“Accessing and processing information is what matters today,” McCown said.

The conventional kind of teacher who stands and delivers in front of a classroom is being outdated by new demands being placed on learning.

“Now what we are experiencing is a guide by the side,” McCown said.

McCown speaks of four A’s as being critical in today’s learning: accessing information, assessing it, analyzing it and applying it to your life.

“How do we prepare children for a career?” he asked, noting that a large percentage of jobs will involve tasks that didn’t exist 15 years ago. “We have to help them learn how to access information. Kids are on social media seven to eight hours a day. They are never away from their phones. They are waking up in the middle of the night when they get a text message. It’s a radically different world now. It’s no longer adequate to give them a K-12 education to college. You have to prepare them for a career, and your role as a parent doesn’t end when they leave home. You have to help them navigate for life, not just to get to college.”

Just having access to information is not sufficient, McCown said. There’s plenty of information out there that’s not accurate. There must be some assessment and analysis to separate what’s useful from what’s not.

“You have to assimilate it in ways that are useful and apply it to your life,” McCown said.

McCown said modern-day education is about preparing children for life.

“We have to do three things,” he said. “We have to create self-directed learners, create self-aware leaders and to be self-confident servants. C.S. Lewis said that ‘reading is the fuel for the fire that restores my soul.’ We need to create skillsets students can take through life. Leadership comes from influences around you. It’s how you develop relationships. Leaders develop followers who become other leaders. All the top colleges want influencers who are leaders.”

McCown said that networking is one of the best skills anyone can learn in school.

“It creates a buzz,” he said. “The best way to do it is to help others before you ask them to help you. Remember that it’s not what people say when you walk into a room, it’s what they say when you leave. That’s the buzz. Self-confident servants know who they are and how to serve rather than being served.”

McCown said it will always be essential to master the three R’s – reading, writing and arithmetic – but today’s student needs the four A’s.

“A self-confident servant can put down that phone and be influential among others,” he said.

It was announced on July 8 that Mr. McCown was succeeding Rick Johnson as the new headmaster at Springwood. Johnson accepted an administrative position at a school in the metro Atlanta area.

McCown was at Kings Ridge School for the past seven years. Atlanta Braves legend John Smoltz co-founded the metro-Atlanta school.

Before Kings Ridge, McCown was the international executive director and senior vice president for the Fellowship of Christian Athletes.

He was involved in launching the first international division of the FCA and founded the training program 360 Sports, which has trained over 10,000 athletes from 60 different countries. McCown’s teaching methods and leadership style have afforded him opportunities to lecture at schools, universities and conferences around the world.