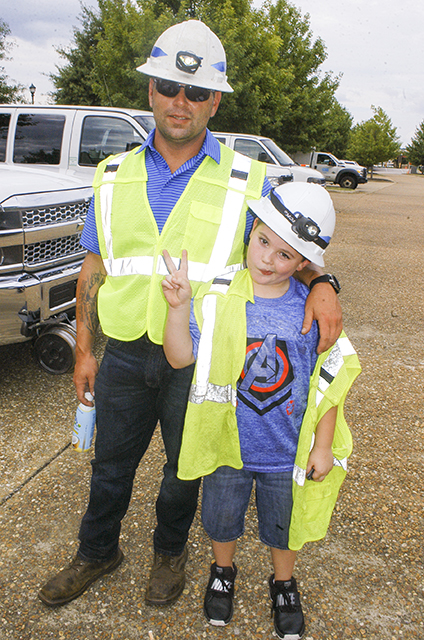 WEST POINT — A track maintenance crew from CSX Transportation has been in the Greater Valley Area recently, which has given the railroad’s No. 1 fan a chance to hang out with his heroes.

Several workers had a rendezvous in front of West Point Depot Monday evening, and that gave Jayden Rogers, 7, a chance to meet them.

“He loves everything about CSX,” Willie Rogers, Jayden’s grandfather said. “He keeps up with all the trains coming through West Point. When we found out there was a track crew in town we went up to the Depot hoping to meet them. When we found them there, Jayden was really happy.”

Jayden was wearing a CSX-like work vest and a white hard hat when meeting the crew. When asked about railroads Jayden said that CSX is the best and he’s happy their trains come through Lanett and West Point.

“CSX is the best,” he said. “It’s so much better than Norfolk Southern.”

The line going through Chambers and Troup counties is one of CSX’s main arteries. It’s been here since the 1850s and is the railroad equivalent of I-85, connecting New Orleans with the Washington, D.C. area.

Jayden lives with his mom, Christy Nelson, is in the second grade at Bob Harding-Shawmut Elementary School and his room is filled with all kinds of railroad memorabilia.

He has a photo album with about 400 photos in it, most of them showing him standing next to trains, boxcars and guys who work for CSX.

One photo goes back to a time long before Jayden was born. Willie Rogers took it back in the summer of 1991 when the excursion train No. 290 stopped in West Point on a trip between Atlanta and Montgomery. Built in 1926, No. 290 is a 4-6-2 Heavy Pacific type steam locomotive that ran for years on the A&WP line.

For a long time, No. 290 served as the Crescent Limited transporting passengers along the Montgomery-to-Atlanta leg between New Orleans and Washington. The big engine was retired in 1954.

In the late 1980s, it was restored by the New Georgia Railroad, an Atlanta-based steam excursion railroad and made many trips out of Atlanta. It’s now undergoing preservation at the Southeastern Railway Museum.

Should Jayden get his wish, he may one day be driving one of those big CSX trains on the route between Montgomery and Atlanta.

Springwood head of school talks about changes in education