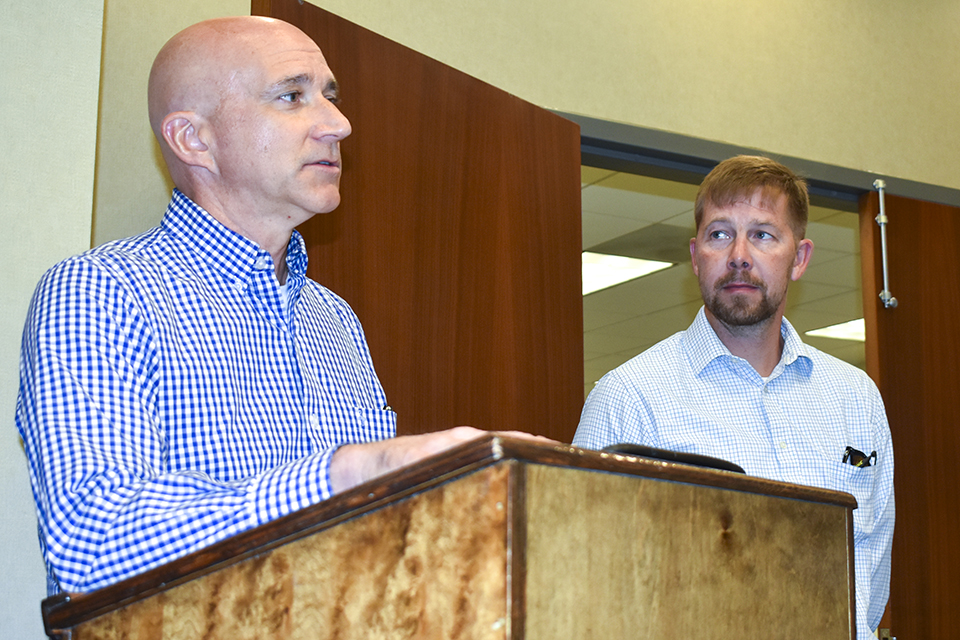 Steve Provost of Barge Design Solutions speaks at the Troup County Board of Commissioners meeting on Thursday. -- Alicia B. Hill

Parks and park programming are considered an essential part of Troup County, but it has sometimes proven difficult for officials to determine which updates would be most meaningful for citizens.

On Thursday, the Troup County Board of Commissioners heard an update on from Barge Design Solutions, who the county plans to hire to create a master plan for local parks using community input.

The Troup County Parks and Recreation Commission also recently received an update on the plan.

The process is expected to cost $125,000 and will be funded through SPLOST V funds.

The design group is also expected to create a master park plan for the City of LaGrange as part of a separate agreement, and that information will likely be factored in with information gained through public input meetings in Hogansville and West Point, as well as an online survey. However, LaGrange officials have stated in past council meetings that they felt it would be best for the city’s park plan to be under the city in order to meet city-specific goals. Troup County Parks and Recreation Director Lance Dennis will help span the gap between the two plans with Barge’s help.

“These guys are doing the master plan for the city [parks], and I am on the steering committee for the city’s master plan, which I think is great because I definitely want to be in the loop of anything that they are planning on doing,” Dennis said. “There is some overlap here, and I want to make sure everything gets handled in the right way.”

Steve Provost of Barge Design Solutions was on hand at the meeting to answer questions. He said creating a plan would take around eight months, with a large part of the time dedicated to gathering and analyzing community input.

“What we are putting together is a data driven plan that has three basic [sections],” Provost said. “It is an eight-month program. It has a lot of pieces to it, but it has three major parts. In general, that is going to be the research and analysis component. That is going to be collecting the data that we base the rest of the plan on. It’ll have an outreach and needs assessment component, and part way through the plan — when we finish outreach and feedback from the public, from focus groups, from the community survey — we will analyze that into a preliminary needs assessment. What we’d like to do is come back to this group and show you what we’ve learned so far.”

Provost said that presentation would take place near the halfway point and would be used for the third and final portion of the plan, which would be creating a strategic plan, a cost analysis of the way services are being provided to the county through the parks, recommendations based on the information and capital recommendations/budgets.

“In the end, what you’ll end up with is an assessment of all of your park facilities,” Provost said. “Mr. Dennis has given us 40 facilities that we’ll be looking at.”

Commissioners put an emphasis on ensuring that residents of Hogansville, West Point and unincorporated Troup County feel heard during the information gathering process, and County Commission Chairman Patrick Crews asked that the online survey be accessible through the county website. Dennis requested that a review of per capita spending on Parks and Recreation compared to comparable counties be included in the analysis.

The Troup County Board of Commissioners is expected to vote on the contract with Barge Consulting for the Troup County Parks and Recreation Master Plan at its regular meeting on Tuesday at 9 a.m. at 100 Ridley Avenue.