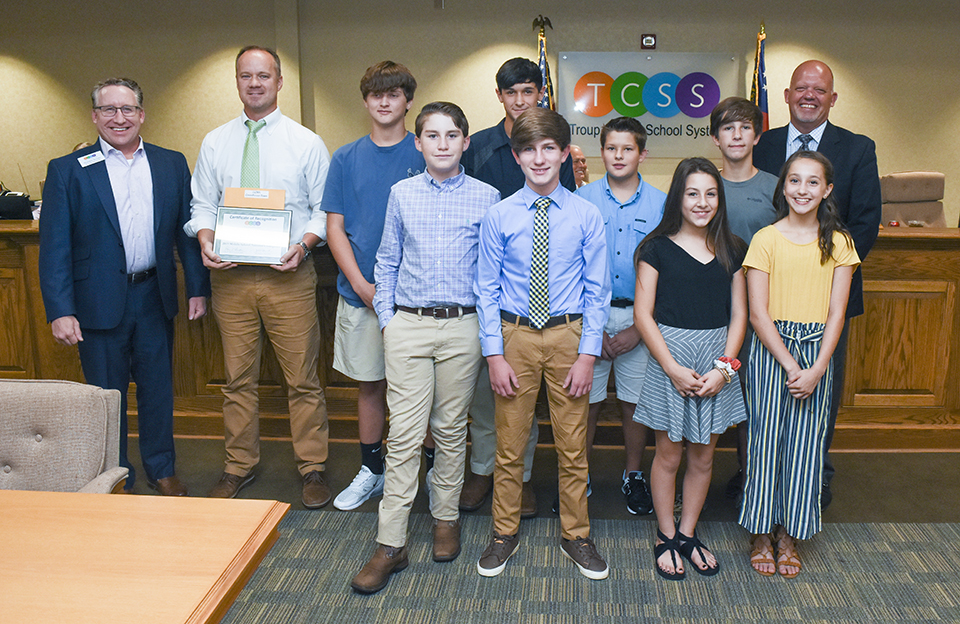 The Troup County School board approved new GPS technology for buses and an effective cleaning treatment for schools at Thursday night’s board meeting.

The new bus technology won’t be put in place immediately, but Thursday night’s purchase was the start of a GPS system, which will allow parents to use an app to determine where their child’s school bus is.

“This is an interesting new age type thing coming around the country. Parents can get an app on their phone and follow their kids’ school bus until they get to the door,” said Superintendent Brian Shumate. “They can set up when they want to be notified, a mile out, two miles out.”

The purchase was from Synovia Solutions in the amount of $80,640. In addition to tracking buses, the new technology can send TCSS’ shop notifications when a bus needs maintenance and will track the vehicle’s speed.

“We will have more of this modern technology on our buses in the near future. We are going to shoot for trying to replace 10 buses a year to get on a schedule,” Shumate said. “While all of our fleet is safe, the older they get the more time they are and more expensive they are to maintain. We want the best buses on the road for our kids and families.”

The cleaning treatment is through Southern Environmental Control at a cost not to exceed $85,000. That total includes antimicrobial treatment at each TCSS campus.

John Radcliffe, assistant superintendent for maintenance and operations, said the treatment has been used in the past at Hillcrest Elementary, Hogansville Elementary and Long Cane Elementary. At all three schools, absenteeism decreased after the treatment.

Also on Thursday, the board approved the memorandum of understanding and bond resolution between the West Point Development Authority, MOBIS, the Troup County Board of Commissioners, the City of West Point, the Troup County Board of Tax Assessors. MOBIS is planning an $11.3 million investment to its property, which will create about 80 different jobs. The tax abatement would be for a 50 percent reduction in taxes for seven years.

The board also re-approved an intergovernmental agreement with the Troup County Archives. The school system’s increased annual payment of $98,410 to the archives did not change, but it had to be reapproved because the Troup County Board of Commissioners made some changes to the contract. The agreement is between the city of LaGrange, the county, the school system and the archives.

During Monday’s school board work session, John Radcliffe, Assistant Superintendent for Maintenance and Operations, said the opening date for the new Troup High gymnasium is expected to be at some point in October. Radcliffe estimated LaGrange’s gym will be completed in summer or fall of 2020.

Much of Thursday’s meeting was spent on recognitions of students and faculty members.

During the actual meeting,

The school board also approved the following:

• Annual mat service through Dye’s Dust Control at a cost not to exceed $46,482.