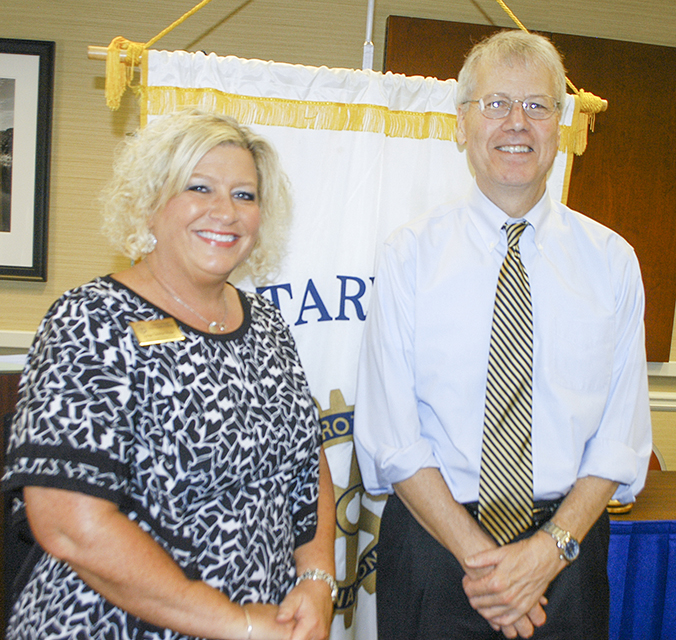 LANETT — Troup County Probate Judge Debbie Wade was the guest speaker at Thursday’s meeting of the West Point Rotary Club and talked about her 24-year career in the probate office.

She moved up to the top position following the retirement of Donald Boyd and has announced her intention to run for office again in 2020.

“Most people realize that we handle estates and anything to do with wills and inheritances,” she said. “But we also do lots of things that aren’t that well-known. We handle guardianship cases; we do passports, pistol permits, can issue orders to have people apprehended who are mentally ill, can declare people who have been missing legally dead, issue fire permits, can choose the county’s legal organ and my favorite, we can regulate the brands for cows and horses.”

Wade said that if there’s one thing she’d like to get across when talking to a group it’s the importance of everyone having a will.

“It’s a good idea for an attorney to do it for you,” she said. “The right terminology needs to be in it. Some people think that when I die my spouse will get everything. That’s not necessarily true. If you have children, that’s a factor. Even if you don’t get along with them and haven’t seen them in 30 years, they have to be notified when you die. Even if you have a will, they can object. There are ways to get around a will.”

Wade said it’s important that everything be in writing.

“A lot of people will say, ‘Daddy told me I was getting the house,’” she said, “but if it’s not in writing it may not go that way. I had a situation once where a man who didn’t have any children died, but he had 60 heirs, and they all had to be notified.”

Wade said it’s extremely important to choose wisely when it comes to having people witness your will.

“You need to make sure they are not in the will,” she said. “Under Georgia law, if they are listed as witnesses they will have to forfeit anything that’s left to them in the will.”

Wade recommends people carefully study what they want in their will.

“We have pamphlets in the office to advise you on what to do,” she said.

She advises people to know about nursing homes before a family member goes to one.

Wade said that she has grown accustomed to wills being contested, many times for trivial reasons.

“Many times, a family member isn’t happy, and many times they just want to get across to other family members how they feel,” she said. “Sometimes this can be settled with mediation. You need to look at ways you can avoid spending thousands of dollars in attorney’s fees trying to settle it.”

Wade said she knows of one family situation where members spent thousands of dollars on attorney fees when what they were contesting was nothing more than blue lace and doilies.

“There are better ways for you to be heard than taking it to court,” she said. “Mediation is a good way to smooth out disagreements.”

Wade said that people need to understand the concept of power of attorney.

“It’s very important,” she said. “There are two different kinds of it — financial and health care. It ends with the stopping of a heartbeat.”

“People will steal money. I hate to say it, but it’s true,” Wade said. “Sometimes people can’t help themselves.”

There are situations where a family member having conservatorship has the best of intentions but gets themselves in trouble.“One man who was a car salesman took $70,000 from his mom,” Wade said. “He bought cars with the money, intending to return the money. The problem was he couldn’t sell them. The money’s gone, he can’t get it back, and he’s going to jail.”

Wade said it’s very common that people can’t control themselves and don’t use good judgement when money is at stake.

“Make sure people aren’t stealing your money,” she said. “Carefully pick who you want doing it before something happens to you.”