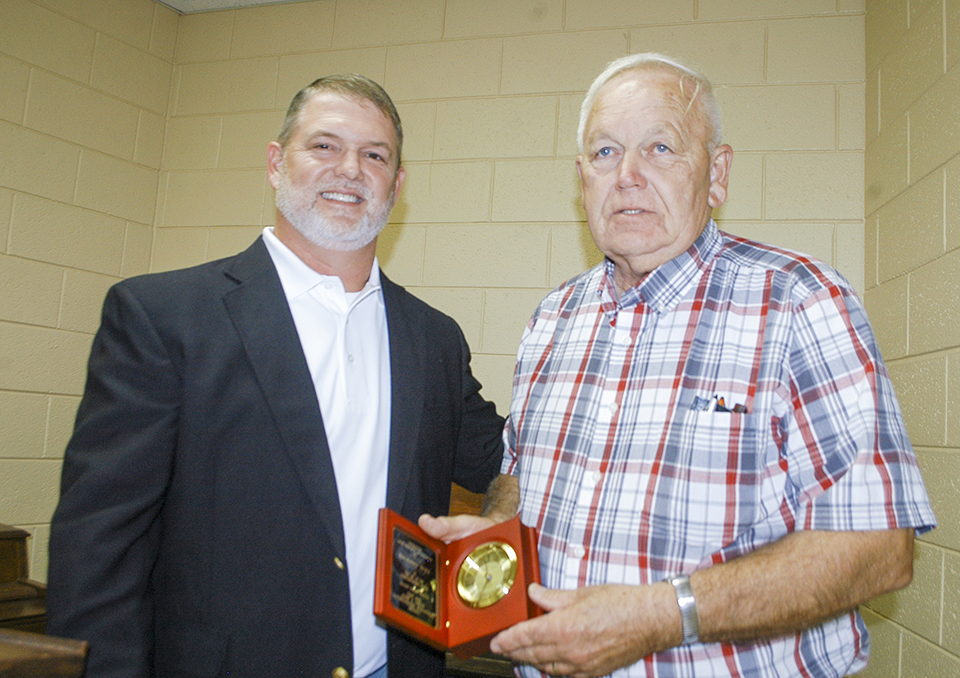 “We’ve been blessed with some awesome volunteers here at Valley Haven School, and he is one of the best,” Executive Director Craig Brown said when presenting the award to Bolt. “He has been doing this for more than 25 years now. He is the chairman of our auction committee and is involved with the Tootsie Roll Drive every year. Richard will pick up just about any donation for our annual auction, everything that is except for a piano or an old TV set.”

Bolt appeared humbled by the recognition and credited many people for making the Hike/Bike/Run fundraiser a success every year.

“If it wasn’t for the people in this room tonight and for so many people in the Valley area, we couldn’t do what we do every year with the Hike/Bike/Run,” he said. “Thank you all for this continuing success.”

A capacity crowd jammed inside the school lunchroom for the annual dinner.

“I have some news that’s good and some that’s not so good,” said Hike/Bike/Run Overall Chairman Don Cleveland. “First the good news. For the 30th year in a row, the fundraising total for the Hike/Bike/Run exceeded $100,000. Thus far, we’ve collected a total of $105,552.

“The bad news is that there’s still around $7,000 out there that was pledged but has not been collected,” Cleveland said. “We are already planning for next year’s Hike/Bike/Run. We hope to have another successful year.”

The 38th annual Walt Meadors Tournament was a one-year event this year but still had very good results.

The tournament took place at the Point University Golf Club in Lanett and raised more than $4,000 for Valley Haven.

Gene White talked about the upcoming Knights of Columbus Tootsie Roll Drive for Valley Haven that will take place on Saturday, Oct. 5. Volunteers wearing bright yellow aprons will be outside local businesses giving away free Tootsie Rolls and accepting donations for Valley Haven.

“We have been doing this for more than 40 years now,” White said. “The reason we have been so successful is that people know what Valley Haven does and they support it.

“No one knows better than me what this school does,” White said, getting a bit emotional. “I raised a child who came through Valley Haven. I thank God every day for what this school does. I appreciate local businesses being supportive of our Tootsie Roll Drives. They do so by allowing our volunteers to be outside their store giving away Tootsie Rolls and accepting donations. They know what Valley Haven means, too.”

Valley Haven School began in 1969 in a mill village home in Plant City. It has been in the present location off Fairfax Bypass since the 1970s.

The money raised in the Hike/Bike/Run provides the local match for the vital state and federal funding the school receives each year.

This allows the school to be staffed, to have the facilities it has along with the buses that transport clients to and from the school five days a week.