Valley wraps up fall practice ahead of opening week 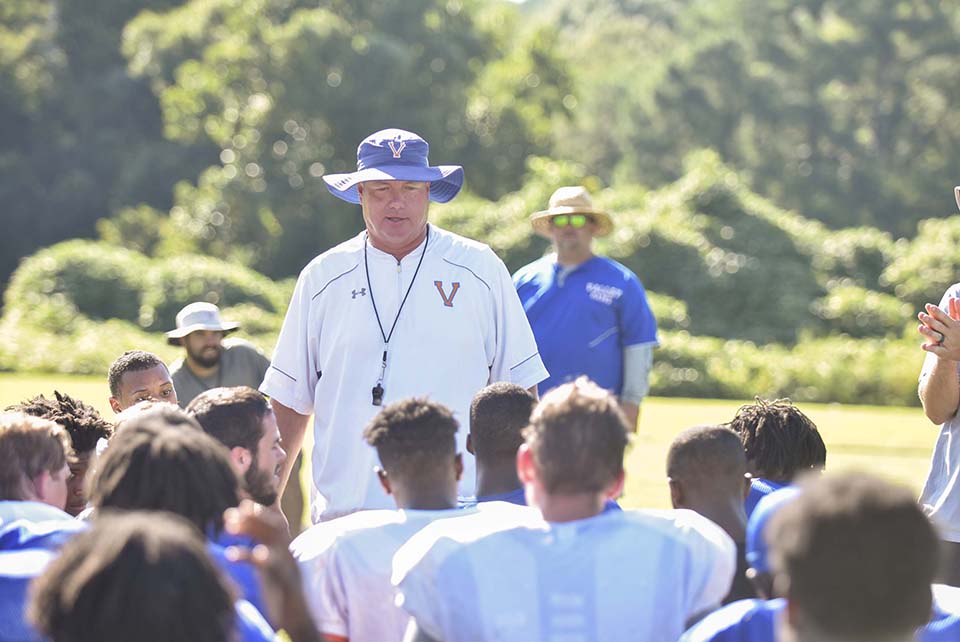 Rashad Milligan | Times-News Listen up: Valley head football coach Buster Daniel talks to the Rams after Friday’s practice. Daniel said that he’s been encouraged by the team’s energy this fall.

VALLEY — Game week is, finally, on the horizon.

The Valley Rams wrapped up fall practice on Friday afternoon, a week away from the season-opener at home against crosstown rival Lanett on Aug. 23.

“It’s been good,” Valley junior Dalton Dunn said. “We’ve been going at it every day, it’s been hot, and we’re still pushing through it. I’m ready for the season.”

The Rams and other local teams practiced in the midst of this past week’s Southern heatwave. To accommodate, Valley head football coach Buster Daniel said the team was given more breaks, and even took pads off for the last portion of one practice this week to keep the athletes safe.

“We’ve got extra spray bottles going around for the kids,” Daniel said. “We’re giving them water, over, over and over. We’re taking extra breaks. You’ve got to adjust to the heat, and you’ve got to  adjust to the cold when it gets  that way, but we made some adjustments during practice by giving them more water time.”

Despite the weather conditions, Daniel said that he was proud of how his players locked in for fall practice leading up to game week.

“Their enthusiasm is off the chain,” he said. “These are just a different breed of kids. I don’t know what it is that flipped the switch from the last two years, but these guys come to work every single day. They do whatever you ask them to do, as many times as they ask you to do it. They’re willing to go.”

A part of the team’s focus is perhaps a product of the long-awaited start of the season.

“I’m very ready,” Dunn said. “I’ve been ready since we started spring training, I’ve been ready for it. I’m very excited to hit someone in a different color jersey.”

Now an upperclassman, Dunn said that he has encouraged the younger players on the team to keep pushing through practices when tasks get difficult. This offseason, he said that he’s gotten stronger and faster.

On a team that is replacing 21 seniors, Daniel said that he’s been encouraged by the fact that he’s returning three starting offensive linemen.

“That’s big for any football team when you have linemen returning because they’ve been with you for a couple of years and they’ve been in the same offense,” he said. “I’d have to say those guys are doing a good job run blocking. Anytime you start practice, the defense is always ahead of the offense.

“I don’t care who you are, where you are, the defense is always ahead of the offense, then the offense will catch up as you go. I think the offensive line has shown the most improvement.”