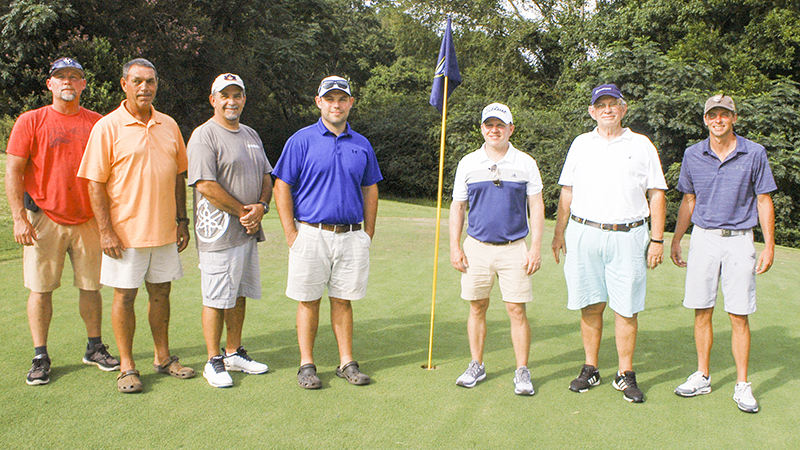 There were two winning teams in Saturday’s Walt Meadors Invitational. On the left is the team with the best net score and at right the team with the best gross score. From left, are Steven Burgess, Danny Baldwin, Lynn Callahan and Nick Baldwin. On the right are Alex Hale, Bill Edwards and Steven Powers. Not shown is Robert Hale.--Wayne Clark

“We were well pleased with what we did for a one-day tournament,” Valley Haven Executive Director Craig Brown said. “We raised $10,000 last year, but that was in a two-day tournament. Twenty-four teams is the most we’ve ever had in the tournament.” The event took place at the Point University Golf Club.

Abbie Taylor had the longest drive on No. 1 and Jessica Dawson had the longest on No. 15. Closest to the pin on No. 3 was Jonathan Dawson, Butch Kilgore on No. 11, Trevor Pool on No. 13 and Terry Daniel on No. 17.

Sponsors for the closest to the pin event were Jayco Renovations, Papa’s Que & Stew, Highway 29 Express, Kia Autosport and Kenny Knox Tire. The Main Street Animal Hospital in Roanoke was the sponsor for the longest drive competition. The West Point Rotary Club was the event sponsor.