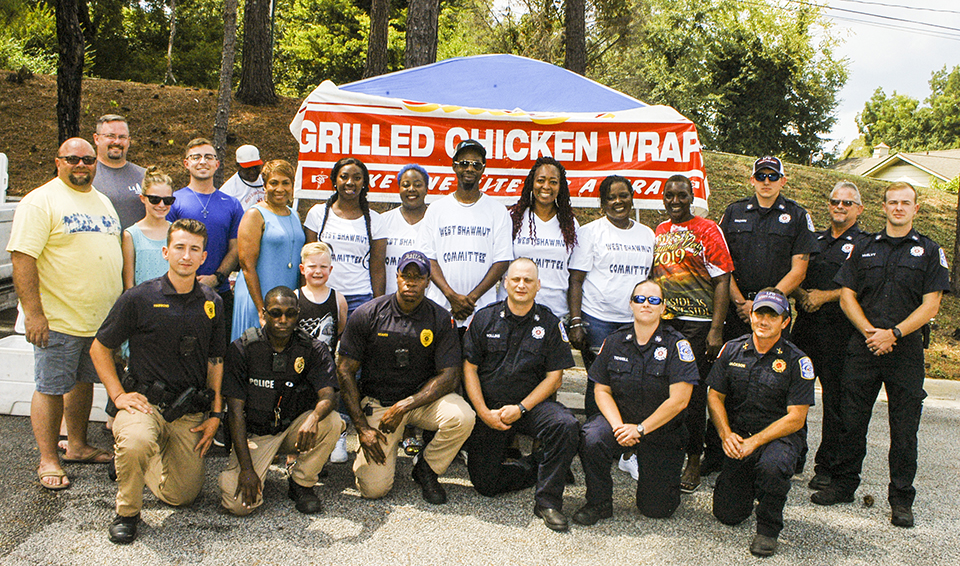 LANETT — On Saturday afternoon, a large group of City of Lanett first responders were treated to a cookout at the city hall complex by members of the West Shawmut Committee.

“We just wanted to thank them for the great job they did at our recent West Shawmut Day,” West Shawmut Day organizer Danny Williams said. “The police department did a great job, and we appreciate that. The Fire and EMS departments were standing by in case they were needed. We want to express oir thanks by treating them to a cookout.”

“We had our third annual West Shawmut Day on Sunday, July 28,” Williams said. “It has grown in participation much faster than we expected, and that’s great. We had somewhere between 8,000 and 10,000 people there, not at one time. People were coming and going throughout the day. Lots of folks had tents set up and were grilling in their yards. It was a fun, community-wide event, and lots of people enjoyed it. We appreciate Lanett officers being there to provide security and direct traffic.”

Another West Shawmut Day organizer Krisse Story said the police officers did great work during the large event in July.

“We were so pleased that everything went as well as it did that Sunday,” she said. “So many people got into the spirit of what was going on, and there were no major incidents that day. With so many people gathered in one place, that was really good.”

Williams said he wants West Shawmut Days to be an annual event.

“We are already planning for next year,” he said. “We are so pleased the community has responded the way it has. Some people were putting their tents up on Wednesday and were well prepared for Sunday. We got about 1,500 people our first year, 4,500 the next year and at least 8,000 this year.”

Neighboring West Point has a big community-wide event coming up Labor Day weekend. On the Sunday before Labor Day, East 9th Street is blocked off, and a big crowd is on hand for grilling out under tents, a DJ and live entertainment.

“We work with West Point Vision in supporting their event,” Williams said. “They are having a barbecue plate fundraiser today, and we will go over to support them with that.