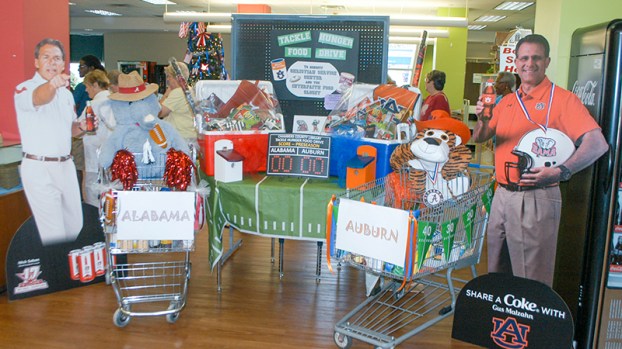 Fans of Alabama and Auburn can help the staff of Bradshaw-Chambers County Library tackle hunger this fall by participating in a food drive for the Christian Service Center and the Interfaith Food Closet. From now through Nov. 18, donated food can be placed in shopping carts that have been placed near the circulation desk. Anyone who donates at least five canned or boxed items can enter a contest to win an Igloo cooler filled with Alabama or Auburn items and a $25 gift certificate to Walmart. --Staff Report

VALLEY — The staff of Bradshaw-Chambers County Library is encouraging Auburn and Alabama fans in the area to come out and support their Tackle Hunger Food Drive.

It’s both a way to show school spirit while making donations to worthy causes.

Two shopping carts are currently set up near the circulation desk, one crimson for Alabama and one navy blue for Auburn. Anyone donating five canned or boxed food items can sign up for a contest. Two Igloo coolers will be given away, one is red and filled with items for a Crimson Tide fan with the other being blue and filled with items for an Auburn fan. Each one also has a $25 gift card to Walmart the coolers and the items filling them.

On Friday morning, the library hosted a Fun Friday Kickoff Tailgate Party and bingo to kickoff the fall season. Attendees were asked in advance to wear the colors of their favorite teams.

There was lots of orange and blue for Auburn and crimson and white for Alabama.

There was also some red and black for Georgia and some black and gold for Southern Mississippi in the crowd. Underneath some food tents on the main floor attendees were served food plats containing chicken fingers from Jack’s, barbecue sliders from Chuck’s, chips, cole slaw, ice cream and a cold drink.

Before the bingo got started, the crowd showed that one is never too old to enjoy tossing a football, playing corn hole, Wheel of Fortune, Ring a Drink or trying their luck with the Snack Cake Walk.

While Librarian Mary Hamiton played classic tunes on her Smartphone, those taking part in the Snack Cake Walk walked on numbers aligned in a Circle. When a song such as Bill Haley and the Comets’ “Rock Around the Clock,” Little Richard’s “Tutti Frutti” or Maxine Nightingale’s “Right Back Where We Started From” stopped, the person standing on the winning number was awarded a Little Debbie snack cake.

“Our library is the best-kept secret in town,” Adult Programs Coordinator Connie Beilfuss told the big crowd as they gathered for bingo in the Lanier Room.

“Come out and take part in the events we have lined up for you this fall and bring a friend with you. To keep up with them, get a brochure at the circulation desk, go to our website, check us out on Facebook.”

By Kevin eckleberry Times-News It was a fight to the finish. The Troup and Harris County football teams, locking horns... read more