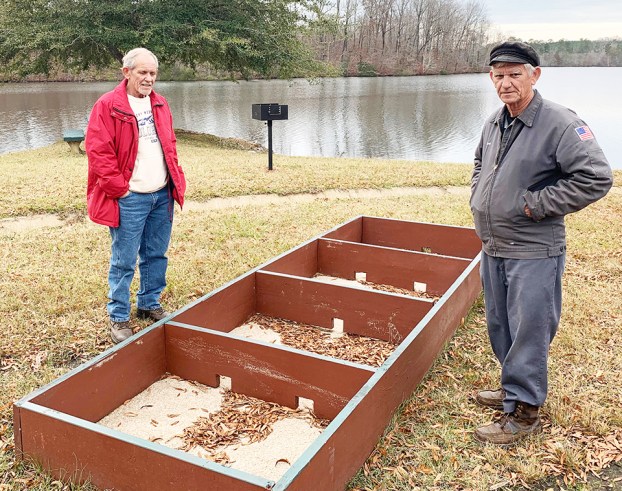 Chambers County Lake Manager Ted (left) and Mike (right) Craig explain how of the lake games — box hockey — works. It’s a game with a tennis ball and the object is to score points by striking the ball with a hockey stick to the other side of the box. -- Dustin Duncan

VALLEY — Ted Craig was the guest speaker at Monday’s meeting of the Valley Lions Club and talked about a rare jewel in east Alabama.

Ted and his brother Mike are the managers of the Chambers County Lake. At 185 acres in size and holding 456 million gallons of water, it’s one of the largest county lakes in the state.

The lake, a 70-acre commons area and an estimated 375 acres surrounding it are owned by the state.

The Craigs have managed the lake for the past a little more than two years. Though they have invested a lot of hard work there, they really enjoy being around Chambers County Lake.

A 26-year veteran of the U.S. Army, Ted managed a successful business before relocating to Chambers County from north Alabama. From that experience, he believes the county lake could be a profit center for the state and county if two main steps were taken. One, he wants to increase the number of sport fish in the lake, and second, he would like to have more activities for the public.

“You look at the success of Cabela’s and Bass Pro Shops,” Craig said. said. “You can’t tell me there’s not money in fishing. You have to do what gets people involved.”

Craig said he’d like for more feeder fish to be put in the lake to help build populations of bass, crappie and catfish.

Freshwater fishermen in this part of the country are primarily interested in reeling in big fish that tend to be bass, crappie and catfish. Craig said he’d like for some hybrid bass to be put in the lake.

When word gets around that sportsmen are having good luck at a certain location, Craig thinks larger crowds will start showing up. He said he’d like for Chambers County have the kind of fish being caught that gets those word-of-mouth stories started. The lake did have a record fish caught in the past couple of weeks. One fisherman reeled in a grass carp that weighed an astounding 63 pounds, Craig said.

Catfish in the 20- to 30-pound range have been caught at Chambers County Lake, and the record bass is around eight pounds.

There have been some major improvements throughout the past two-and-a-half years and Craig is proud of that, but would like to see more being done.

“We worked with Auburn University on a $34,000 playground grant,” he said. “We’re glad to have that. We’ve reopened our birding trail and are on the Piedmont trail system. We also have a walking track. The Chambers County Sheriff’s Office does a good job of cutting the grass for us. They also weed eat at the waterline. That makes it less snaky near the water, and we appreciate that. We’ve put in more signage, increased primitive campsites from seven to 11 and put in new picnic tables and grills. We’ve done lots of landscaping work around the lake. When we’re closed in December and January, we have around 200 dead trees to cut on the land surrounding the lake.”

Something new is a 500-foot radio-controlled car racing track. It’s very popular with the kids. Craig said one encouraging trend is that the lake’s Facebook followers have gone from 500 two-and-a-half years ago to more than 8,000 today.

“The Chambers County Commission and the Greater Valley Area Chamber of Commerce have been very supportive of us, and that means a lot,” he said. “Everything we make goes back into the lake, and that’s the way it should be.”

The big problem is that the lake is barely breaking even. Something needs to be done to generate more participation.

“Believe it or not, 70 percent of our fishermen come from Lee County,” Craig said. “We also get a lot of people from Columbus and Harris County in Georgia and Tallapoosa County here in Alabama. Money can be made off this lake if people are catching more fish, especially sport fish. Having more feeder fish in the lake would help. I think it would really help our bass population. When the feeder fish dwindle, the bass will eat crappie spawn, and that hurts your crappie population.”

Chambers County Lake is a nature lover’s paradise. There are nesting bald eagles on both ends of the lake and a growing number of ospreys as well.

“We have some deer around the lake,” Craig said. “We have a problem with raccoons. They get in the trash bins and scatter litter all about, leaving us a mess to clean up.”

Craig said that Chambers County Lake has much unrealized potential.

“I feel like it’s a real jewel for our county, but we need to get more people coming here,” he said. “I think we could make a big difference over the next five years if we take steps that attract people here. If we do that this lake will be much more profitable for the state and county. I think it could be generating $500,000 a year if we make it profitable through a five-year plan. I just want the state to be happy, and the county to be making some money.”

On most days, the Craig brothers work from daylight till dark. In late June and early July, that’s 14 hours a day.

“That’s a 98-hour workweek,” Craig said, “But we are here to serve the public, and to have people coming back. I want this lake to be a showplace everyone talks about. As it is, we are the fourth most productive out of 22 state lakes. Most of the county lakes are losing money, and that needs to be turned around. It needs to remain under state management. The state maintains it with water testing and fertilizing. That’s good, but our lake could pay for itself if we did more things to attract people.

Craig is proud of his Irish ancestry and the knack of an Irishman for figuring things out if given the chance.

“I’m just an old county boy from north Alabama, but I can figure things out,” he said.

One thing he does want to do is to find the missing goat. When the Craigs first got here 30 months ago, they rented 100 goats and turned them loose on the state-owned land around the lake.

“I found out two things about goats I didn’t know,” he said. “They can swim, and they can kill snakes. The problem with renting 100 goats is that you have to catch them and put them on a trailer when you take them back. We caught 99 of them but never found the final one. I’d like to find out what happened to him.”

“You can put your own boat in the lake if you run it at idle speed,” Craig said. “The state prohibits sailboats on the lake.”

VALLEY — Firing a gun within the city limits of Valley could soon be a thing of the past. A... read more