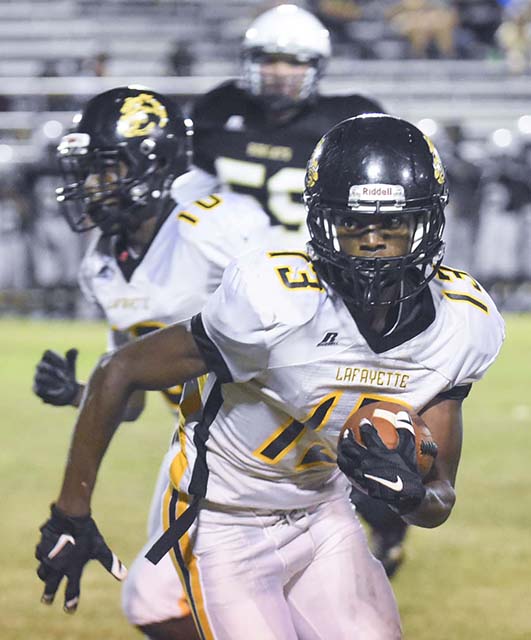 Rashad Milligan | Times-News Combs: LaFayette freshman Joshua Combs accounted for all of the Bulldogs’ touchdowns on Tuesday night at Beulah.

BEULAH — Those in attendance for LaFayette and Beulah’s junior high school matchup were treated to witness the Joshua Combs Show as the Bulldogs (3-0) defeated the Bobcats (2-2) 34-8 on Tuesday night.

Combs, a freshman running back who has also joined the Bulldogs’ varsity team this season, scored on the first play of the game with a 70-yard touchdown run. LaFayette continued to set the tone early by making a big block on the two-point conversion that gave the Bulldogs an 8-0 lead.

“I told the kids that we kind of got outplayed today in all phases of the game,” Beulah junior high head football coach Jeff Lamb said. “Sometimes that happens, you just have to come back to work tomorrow and everything will be okay.”

Combs began the Bulldogs’ first defensive possession with a quick big hit in the backfield on the outside. Neither team would be able to sore for the remainder of the opening period.

Beulah opened up the second quarter driving down the field led by eighth-grade running back Jacori Tarver. The drive that Tarver got the Bobcats inside the 10-yard line ended with a touchdown pass to LJ Fitzgerald with 2:14 to go in the first half to cut the deficit to two points.

On the ensuing LaFayette drive, Combs used his six-foot frame to leap and grab a catch in mid-air to add a long touchdown reception to his stat line. The score gave LaFayette a 14-8 lead at halftime.

With 5:18 remaining in the fourth quarter, LaFayette was tackled for a safety.

Combs caught his second touchdown reception with 3:18 to go in the ballgame to put LaFayette up by 20 points.

On the ensuing Bobcats’ drive, Combs grabbed an interception with 1:24 remaining.

Beulah still had a timeout remaining, so LaFayette Junior High head football coach Michael Patillo’s goal was just to get one final first down before running down the clock.

Combs received the handoff in the backfield, saw green grass in front of him and scored one final time on a 90-yard run with 47 seconds to go in the game. Pattillo clarified after the game that scoring was not his intent on the late-game play.

Pattillo also said he was proud of his entire team’s efforts.

“Joshua got all of the touchdowns, but he didn’t get them by himself,” Pattillo said. “Everybody had to do their job for him to be where he needed to be.”

When asked if he believes he’s going to get tackled before reaching the end zone, Combs responded with a simple and respectable two-word answer on Tuesday night.

LaFayette plays at Loachapoka next Tuesday night, while Beulah will head on the road to play at Tuskegee Institute Middle School next Tuesday.