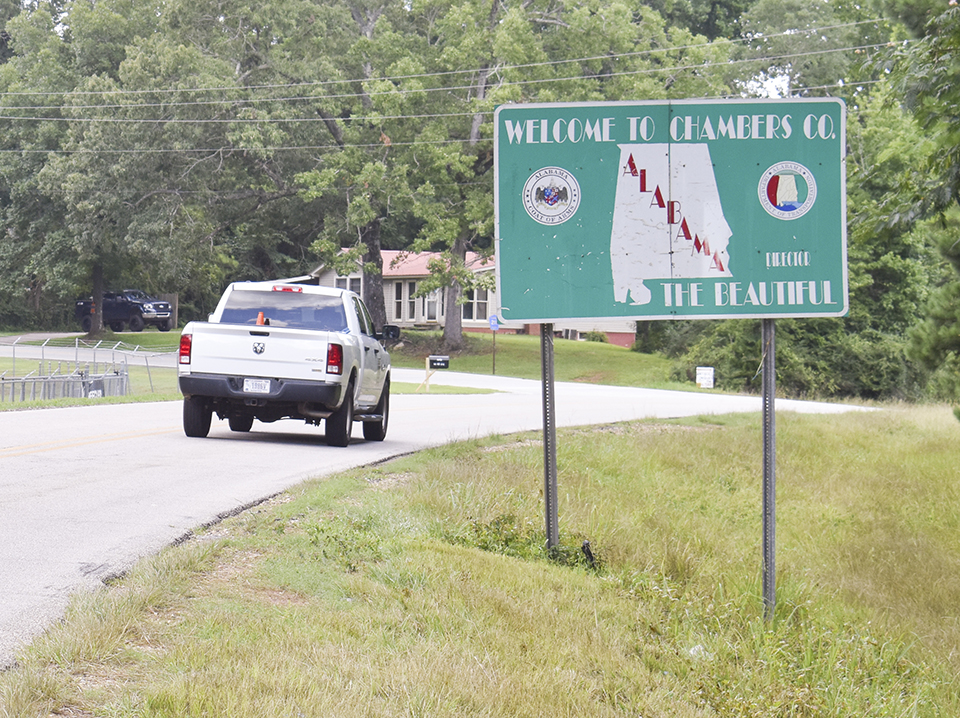 Pictured is the border sign for Chambers County at the beginning of County Road 212 after leaving Troup County. This patch of road will be repaved by county at the end of July. -- Dustin Duncan

LaFAYETTE — The Chambers County Commission approved amendments to the county’s 10-year transportation plans to improve roads and bridges in the county.

The amendments to the plan include projects from 2019 to 2025, as the plan was approved originally in 2015.

According to documents provided by Chambers County Engineer Josh Harvill, the county plans to spend about $2.5 million in road and bridge repairs throughout the next year.

Harvill said at a recent meeting that throughout the next five years, the county hopes to improve 78 miles of road and complete six bridge projects totaling about $11.6 million.

The county is also hopeful for an Alabama Transportation Rehabilitation and Improvement Program-II grant that would allow for improvements to the intersection off exit 70 on Interstate 85 and the corridors of County Road 388 and 177.

The grant program, also known as ATRIP-II, is a grant through the Alabama Department of Transportation for projects created in the Rebuild Alabama Act.

Harvill said in August that the commission has already invested about $20,000 on a traffic study which revealed needed improvements of the entrance and exit ramps, as well as widening the roads due to increased development near the industrial park.

The county contracts with the medical provider in exchange for medical care for Chambers County inmates.

According to documents within the county, there was a three percent increase from the previous year.

In a letter from Southern Health Partners to the county, it said rate increases are an unavoidable part of doing business.

Additionally, the county removed a chunk of property from industrial park status in the Shawmut village.

James Wood, managing member of D.W. Partners, asked for property on 23rd Boulevard in Valley to be removed from industrial park status so that a single-family residence can be constructed on the plot.

County Attorney Skip McCoy said the property would receive county services but would also be in the Valley Police Department’s jurisdiction.

McCoy said that Probate Judge Paul Story made the request to declare the machines surplus and has structured an acquisition for 26 new voting machines for the upcoming election.

He said the county would use the old machines as credit toward the price of new machines.