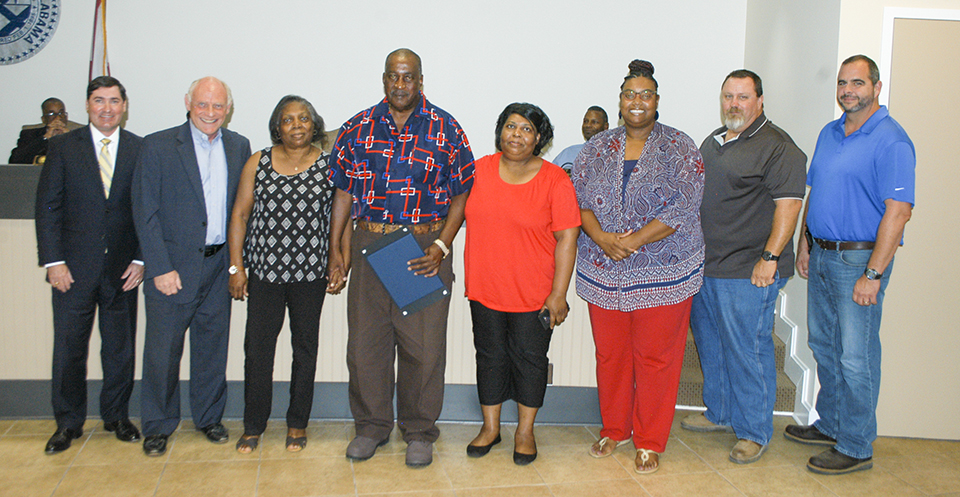 LANETT — It’s not often a retired city employee receives commendations from a governor and a U.S. congressman on the same day.

However, that’s what happened Monday night at the Lanett City Council meeting.

Ellis retired from the city on May 1 after 44 years of service with the Lanett Electric Department.

“John began his career with the city in October1975,” the governor’s proclamation reads, “and as a result of diligent work and demonstrated ability to maintain the city’s power supply quickly graduated to head lineman.”

The proclamation went on to state that Ellis was a major link in the city’s electrical department and saw the city through some difficult situations such as Hurricane Eloise in 1975 and Hurricane Opal in 1995, numerous thunderstorms during the summer months along with snow and ice storms in the winter time.

“(Ellis) has served as an example to his peers and the residents of this community and state, both in his personal achievements with fairness and dedication,” the proclamation reads. “Now, therefore, I Kay Ivey, Governor of Alabama, the mayor and council of this city do commend John Wesley Ellis for his dedication to the City of Lanett and hereby extend our congratulations on his well-earned retirement and our best wishes for continued success, happiness and good health for years to come.”

Jonathan A. Hand, executive director of Electric Cities of Alabama, made the presentation on behalf of the governor.

“I congratulate you on your retirement from the City of Lanett after 44 years of faithful service. I am proud to call you a friend,” Congressman Ferguson’s commendation reads. “I commend you on your vital role in the City of Lanett’s Electrical Department and for your dedicated service to its citizens. Your leadership and work ethic are greatly admired and will leave a lasting legacy on this community long after your working career has ended. You are someone who could be counted on for getting things done, and I thank you for that. As you set out on this new stage in life, I hope you enjoy spending time with your family and friends. I wish you the best in your retirement, and thank you again for your service.”

Ellis was grateful for the recognition and said that he was glad to have had a lengthy career with the city.

Mayor Kyle McCoy said that no one else knew the city’s electric lines the way Ellis does and that the department still calls on him from time to time for input.

Ellis was accompanied to the meeting by his wife Angie and step daughter Jennifer Bailey.