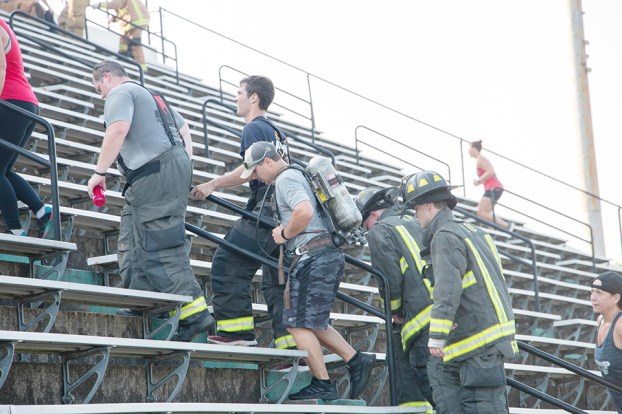 The LaGrange Fire Department and LaGrange citizens took part in the annual Stair Climbing Challenge at Callaway Stadium on Wednesday morning. Wednesday was the 18th anniversary of Sept. 11, 2001. -- Jenna Oden

As the 9/11 recordings of the New York Fire Department and first responders voices echoed through Callaway Stadium on Wednesday, members of the LaGrange Fire Department, EMS and the community marched up and down steps of the stadium in honor of the men and women who lost their lives 18 years ago.

“We did the stair climb today to honor the firefighters that were lost, but also everybody that lost their lives on Sept. 11, 2001,” LFD Chief John Brant said. “We started this last year as an event for our rookie school, and we wanted to involve the public this year.”

Rookie firefighters participated in this event so that LFD can convey to them the significance of the events of 9/11.

“We keep the honor and pride going, as far as what happened that day,” Brant said. “And just honor the men and women that bravely went in that structure.”

The public was invited to participate in this year’s stair climb challenge.

“We are impressed and so thankful for the public and all the volunteers we had,” Brant said. “Each and every year we want to grow this event bigger. We are going to keep on and hopefully have all the bleachers filled up one day.”

“It is a part of never forgetting and our small way of saying ‘hey, this is amazing and we support the heroes that are here,’” Rhye said.

“When we met with Chief Brant and he painted the picture, I just thought that the respect, the honor of keeping it [9/11] alive; there was no way we weren’t going to partner with them.”

Amy Sweatt came out to the event to support her fellow first responders and honor those who lost their lives on 9/11.

“I work at the police department, so these are our team members,” Sweatt said.

All proceeds raised from the event will go to the Terry Farrell Firefighter Fund of Georgia.

VALLEY – In memory of the tragic events that occurred on Sept. 11, 2001, the faculty, staff, parents and students... read more