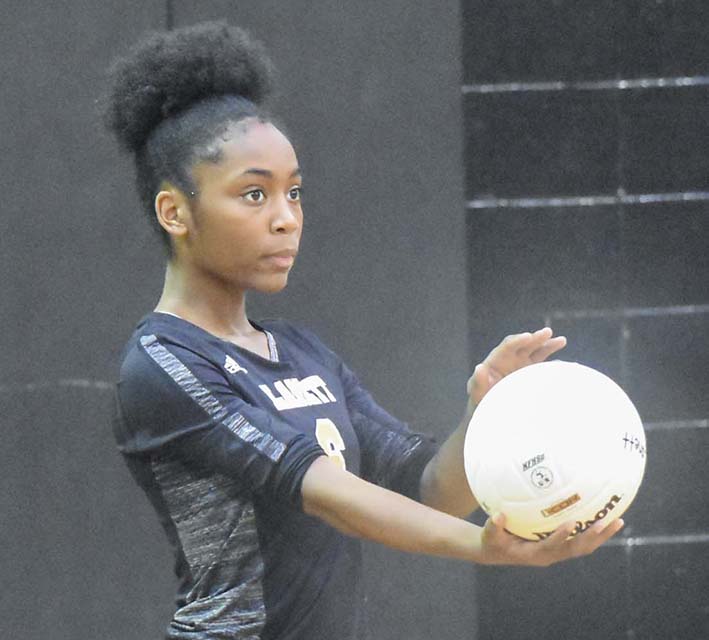 Heading into the third set, it looked like the Panthers (0-2) were on their way to getting swept. A fiery pep talk from head coach Krisse Story, however, resulted in Lanett winning the next set.

“I told them that we’ve been in the gym since June,” Story said. “We’ve worked too hard to perform the way we did [in the first two sets] tonight. They responded to it. I think that the fact that I reminded them that we deserve to win as much as the next person, reminding them how much time we spent in the gym made them more excited and gave them the push and the drive they needed to finish.”

Jakiya Little then led Lanett to another run as the Panthers’ server, approaching closer to set point.

“She’s a great server and she doesn’t show a lot of emotion,” Story said. “I think that excites everybody else because she’s not bragging, she’s not doing all of the extra stuff that you see people do when they’re serving the ball. She just gets it done.”

Jayla Higgins made an emphatic spike for a kill at the net to get the team fired up as well in the third set surge before Lanett ultimately won the set 25-19.

Issues that Story said she saw in the match were the Panthers’ serves and on-court communication. There were a couple of instances where two teammates would run to the same area of the floor with no one calling for the ball, resulting in Russell County scoring on multiple plays.

Looking at small steps in the team’s development, Story said that she was very encouraged to see the team get a game over Russell County, the opponent they opened the season at on Aug. 29, losing in straight sets.

“To see how much we’ve grown, even from last week, makes me extremely pleased,” Story said.

Lanett returns to action at home against Central on Sept. 11 with the junior varsity game beginning at 5 p.m. EDT. and the varsity match following.