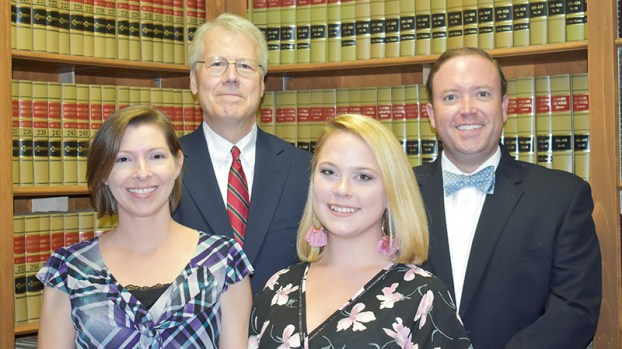 The firm’s principal attorney, Larry Nix, is the grandson of founder Howell Morrow and son of long-time member of the firm Charles Nix. Morrow & Nix is reaching a milestone anniversary in 2019. It began in 1919, 100 years ago. Nix said he’s proud to carry on a family tradition and wants to keep practicing law as long as he can.

“It gives me something to do,” he jokes. “I’m not that much into gardening, and I can’t play golf all the time. I’m proud of the Morrow & Nix name and want to continue it on.”

He had an opportunity to change it to Nix & Nix in the 1980s when he went to work for the firm when his dad was the principal.

“At that time, it had been known as Morrow & Nix for 70 years, and I didn’t want to change it. I’m glad we didn’t,” he said. “I have been fortunate to have been in a profession I absolutely love. I love getting up in the morning and going to work.”

Nix feels fortunate to have had his productive years as a small-town lawyer in the town he grew up in. A lawyer friend of his in the Birmingham area made that point very clear to him on one occasion.

“He’s in a very specialized area of law and has made lots of money,” he said. “He has a beautiful home in Mountain Brook and to most people is the very picture of success. I can remember telling him that I would change places with him in a heartbeat. He told me he’d jump at that opportunity if he could and that I was the lucky one. He had to spend many, many hours doing what he did and had to travel a lot. He told me I had it made being in the town I grew up in, being around people I’d known all my life and having the time to watch my boys play little league baseball.”

Nix didn’t plan on being a lawyer; it just worked out that way.

“I majored in journalism in college,” he said. “After graduating from college, I spent one year working for a TV station in Mobile. I decided that’s not what I wanted to do for a living and talked with my dad about it. He never pressured me in any way to go to law school, but at that point in my life, that’s what I wanted to do. My sons are in their thirties now and chose different career paths. That’s okay. The only advice I ever gave them was to be happy in whatever they did. Charlie is in the Charlotte, North Carolina area and Wesley is in Athens, Georgia. They are doing well, and I’m pleased with that. I’m also pleased they made their own choices and are happy with the way things turned out.”

Nix said it’s always best to seek legal advice before making decisions that will have consequences.

“Sometimes people come to lawyers after they have jumped off a cliff and are in damage control,” he said. “It’s best to talk about it before taking that jump. We help people in whatever situation they are in. It’s very satisfying to know you can help people in many ways. I’d like to keep doing this for as long as I can. I have no plans to retire.”

Nix has a young partner who is taking some of the workload off his shoulders. Brian Aplin is a graduate of Mercer University and Mercer Law School. He lives in the LaGrange area.

“It’s worked out well,” Nix said. “It really helps having a partner, especially someone as sharp as Brian. It is so fulfilling to be a small-town lawyer. There’s a special kind of beauty in it. You are not going to make $600,000 a year, but you will have a great lifestyle. I’ve found over the years there is a comfort level with people when they tell others who their lawyer is. They like to sit down and talk to people who will listen to them. I don’t think you have that in a big-city environment.”

Morrow & Nix has roots in West Point that go back to 1902. A minister named Robert Baxter Morrow assumed duties at the West Point Presbyterian Church. A Civil War veteran, Reverend Morrow had served under General Nathan Bedford Forrest. After the war, he and his wife had 10 children. Their eighth child, William Howell Morrow, was born in 1892. Known to everyone as Howell Morrow, he would attend the University of Mississippi as a young man and then earn a law degree at the University of Alabama. The U.S. had entered World War I at that time, and he entered the U.S. Army and saw action in Europe.

After the war, he returned to West Point hung out his shingle and practiced law for many years. In 1918, Howell Morrow met and married Annie Laurie Neville, who was from the Florence, Alabama area. Howell and “Lollie” had two children” William H. Morrow Jr. and Annie Laurie Morrow.

Annie Laurie “Pops” Morrow attended Wesleyan College in Macon, Georgia. In 1948, she was introduced to a young man from Acmar, Alabama who had graduated from the Alabama Polytechnic Institute, better known as Auburn.  Army buddies and old friends knew Charles Nix by the nickname “Dirt.” He had flown P-51 Mustangs during World War II. Charles was still in the Army Air Corps reserve in the late 1940s and elected to start law school at the University of South Carolina due to its proximity to an airbase.

He later transferred to the University of Alabama School of Law, where he graduated in 1951. Relocating to his wife’s hometown of West Point/Lanett, Charles went into practice with his father-in-law, Howell Nix, whom many people called the colonel.

“It was an honorary title,” said Larry Nix. “It’s the only name I called him by. I didn’t say grandfather, grandpa or any other such name. I simply called him colonel. It was a title of respect, and he liked being called that.”

In 1982, William L. “Larry” Nix joined the firm to practice law with his father. One of his first actions was to persuade his dad to keep the Morrow & Nix name.

“He wanted to change it to Nix & Nix,” said Larry Nix. “I wanted to keep the Morrow name and the long-time legacy it represented.”

Charles and Larry practiced law under the Morrow & Nix banner until Charles’ death in 1997.

Chambers Academy pulls away from Abbeville in second half, win 45-20