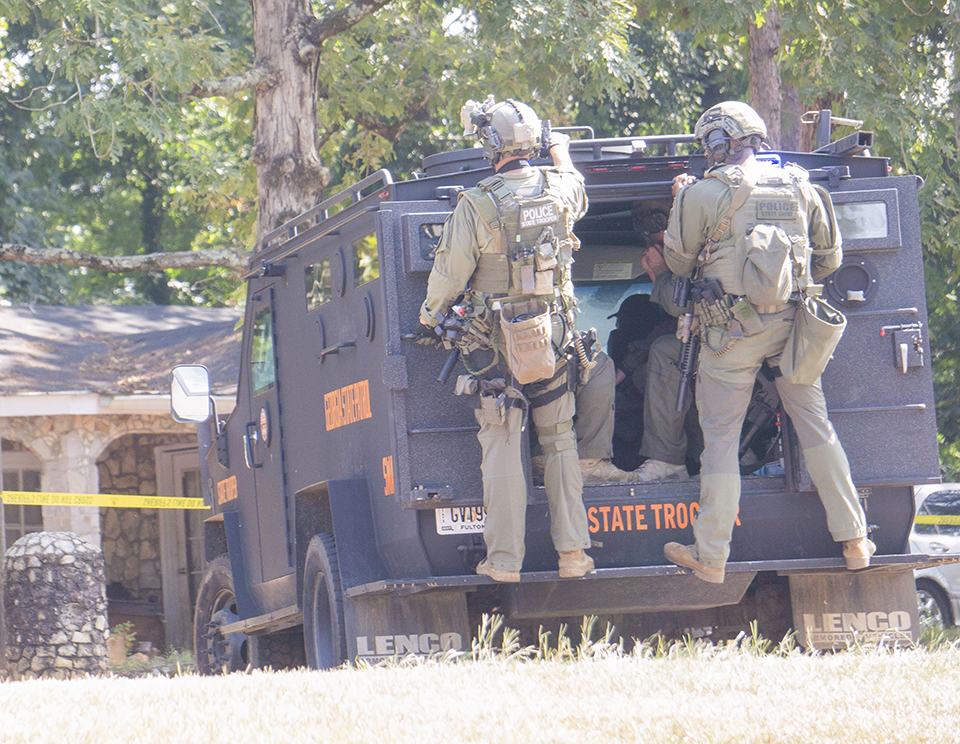 SWAT team officers get ready to enter a home in the 300 block of West Point Road in LaGrange Wednesday afternoon. Officers were attempting to contact an alleged shooter from earlier in the day. -- Jenna Oden

Law enforcement officers spent hours at a home on the 3000 block of West Point Road on Wednesday, trying to contact an alleged shooting suspect.

The Troup County Sheriff’s Office and Georgia State Patrol believed 53-year-old Craig Allen, a suspect in an early morning shooting, was barricaded in the home. After securing warrants, a SWAT team with GSP entered the home but no one was in the residence.

The investigation started when TCSO deputies responded to a call around 10 a.m. to West Georgia Medical Center to a person who had been shot in the leg, according to TCSO Sgt. Stewart Smith.

“He [the victim] told us the incident took place at this residence here on West Point Road,” Smith said. “We secured the residence shortly after that. We called in resources with the GSP SWAT team.”

Stewart said they had reason to believe Allen was in the residence because he had made contact with other individuals.

Smith said TCSO will use any additional resources and witnesses they can to now locate Allen.

“We are just asking the public if they know where Mr. Craig Allen is…to please call 911 or they can call Crime Stoppers and get that information to us,” Smith said.

Smith said Allen has been arrested in the past.

“He will be placed on a fugitive list so they can expedite the search at this point,” Smith said. “Right now, we are still going to check a lot of the houses in the area. He’s got some family around here and see if maybe he’s in another house.”

“Our investigators are in the house now, and they will go through any evidence they can find, and maybe hopefully find the handgun involved in the shooting,” Smith said.