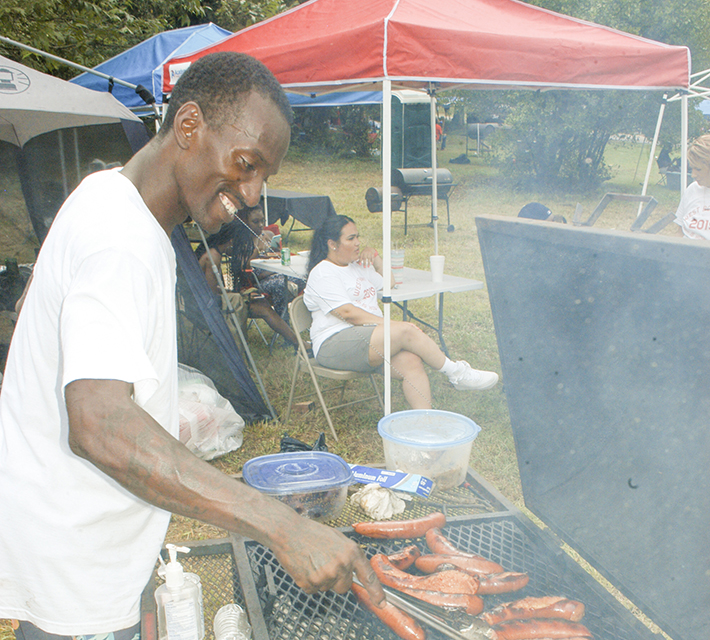 WEST POINT — Sunday afternoon’s third annual West Point Day was a huge success with several thousand people in attendance. The crowd topped 5,000 people last year, and this year’s turnout ranged between 7,000 and 7.500, according to organizers. More than 100 tents were set up in the east bank neighborhood including portions of East 7th, 8th and 9th Streets.

Intermittent showers caused people to duck under those tents for brief periods, but all in all the water was good. “It’s a big community family reunion,” said Audrey Bailey, president of West Point Vision, the sponsoring organization. “Many people grew up in West Point and have fond memories of the town and the people they knew growing up. It’s a chance for them to come back home, renew old acquaintances and have a fun day on Labor Day weekend. It’s a good time to have it. Everyone can enjoy themselves 0n Sunday and travel back home on Monday. We have people here today from all over, some from as far away as San Francisco. The one thing we have in common is that we grew up in West Point and love it here.”

It takes a year of planning and fundraising by West Point Vision to have West Point Day. There’s no admission charge, and the food and entertainment is free. A stage was set up off East 9th, and the live entertainment took place between 4 p.m. and 8 p.m. There were miniature train rides for kids. West Point police along with fire and EMS personnel were there in case anyone needed assistance due to the hot weather. The smell of good food was ever-present as many people grilled chicken, sausage, pork, beef and fish. It was also a chance for college football fans to celebrate the success of their favorite team the day before. There were plenty of people in Georgia, Auburn and Alabama shirts.

“West Point Day is a collaborative effort between the City of West Point and West Point residents,” Bailey said. ‘We want to thank everyone for working together to make it the success it has been. We very much want to continue this in future years.”

Daily quickly added that West Point Vision is not just a one-day-a-year thing.

“We raise funds throughout the year,” she said. “We have raffles, barbecue fundraisers, a music festival in the park and on Friday we had a new school versus the old school basketball game in the West Point gym. It was a lot of fun for everyone.”

The old schoolers will be glad to know the older guys gave a good account of themselves, losing the game by just a few points.

“We want to help out anytime we hear of a West Point family who is in need of help,” Bailey said. “We have helped families who have have had a house fire. During the Christmas season, we like to take gifts to the West Point Active Life Center and to enjoy a day with seniors. We also like to recognize students at West Point Elementary and Long Cane Middle School when they do good work. We made a donation to the Fuller Center to help them in what they are doing in Talbot County, to help people recover from a tornado.”