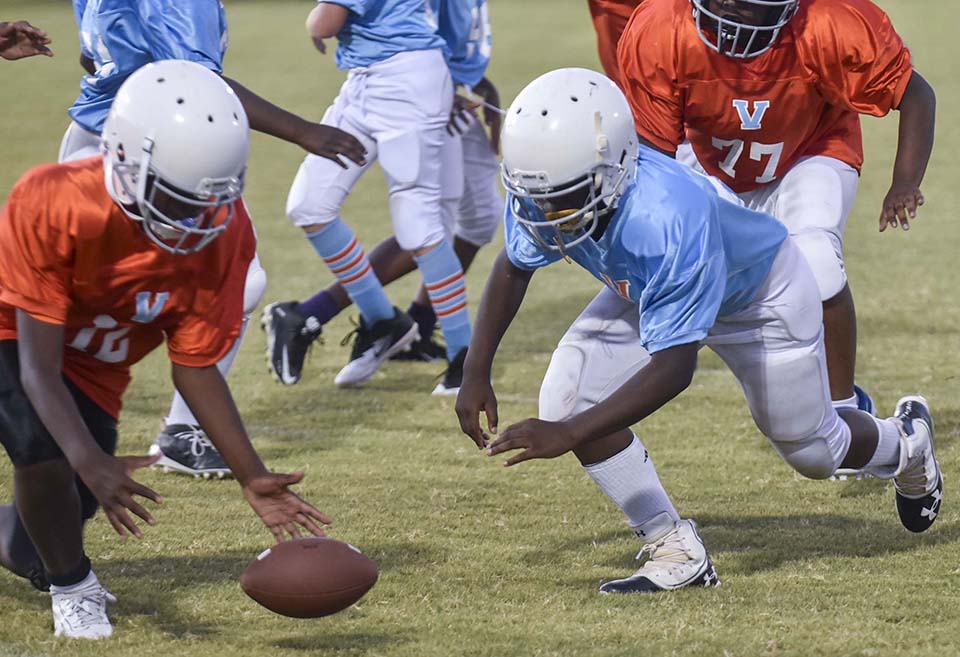 Rashad Milligan | Times-News free for all: A Valley Orange defender and a Valley blue running back dive for a loose ball on Monday night.

“I’m happy for the kids because it’s hard when you lose a couple in a row at this age,” Valley Orange, in the 11 and 12-year-old league, head coach Shane Andrews said. “It’s big to beat that team because they were undefeated before tonight.”

Valley Orange running back LaMorris Carr broke free for a big touchdown run early in the first half for the go-ahead score of the night.

Valley Orange’s defense also took advantage of a couple of fumbles from Valley Blue’s carriers in the game.

“It takes guys a little time to get around him,” Andrews said. “He’s a great kid, he’s fun to be around. It makes a world of difference. You can tell when the kids got to the park today and they saw he was back that they were fired up about it.”

Valley Blue stopped Valley Orange on fourth down inside of the 10-yard line with 40 seconds for one more opportunity to score on an offensive drive. While Valley Blue completed a pass for a first down, the team was unable to get the ball much further than midfield. Valley Blue’s final possession ended up in a fumble with six seconds remaining to end the game.

“[Our] intensity was down,” Valley Blue coach Labrandon Lockhart said. “We weren’t as intense as we’ve been the entire season. I guess there was a little complacency in it, and we lost, but we live to fight another game. It’s all good.”

“The recreation department has done a good job of dividing the players up,” Andrews said. “All of the game have been pretty competitive. Kudos to them when they get 50, 60 kids and they have to split them amongst three teams. Sometimes it works, sometimes it doesn’t. This year, it looked like Mark and his staff did a great job of making all three teams competitive.”

Valley Blue returns to action on Tuesday night to face Valley White, while Valley Orange is off until Thursday to also play Valley White.