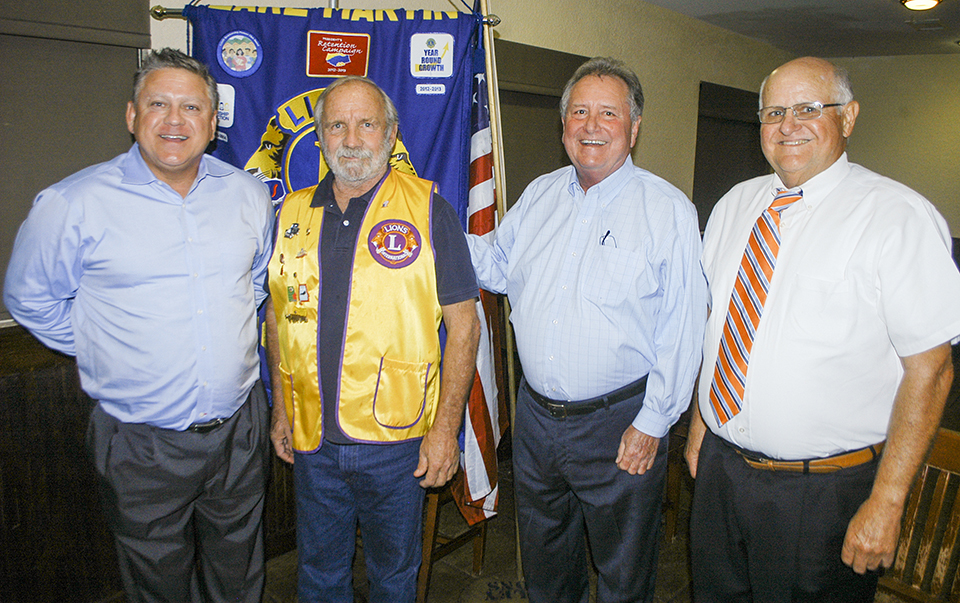 Cal Franklin, director of municipal marketing, and Rick Sweeney, vice president of operations, talked about the company’s plans to serve residential customers in east Alabama and west Georgia. AmWaste has grown from a company that generates about $10 million in revenue in a year to one pulling in more than $40 million a year.

AmWaste recently acquired LaGrange Sanitation and Mr. Greenjeans. It now serves up to 80,000 residential customers in Alabama, Georgia and Louisiana. It has 28 roll-off routes and 10 commercial routes in three states.

“We are happy to be in Chambers County,” Franklin said. “We also serve the cities of Valley and Lanett, and Randolph County. We have purchased Mr. Greenjeans from David and Allen Hunt and are updating their equipment. We are serving LaGrange and the Troup County area.”

AmWaste started in the Birmingham area in 1990 and was owned by John Meredith. In 2008, Chip Russell and John Wright acquired the company. Russell is an engineer by training and is now the sole owner.

AmWaste now serves about 3,700 customers in Chambers County. The company plans to replace the rollout carts that have been damaged over the years and plans to have trucks on the road every weekday.

Sweeney said that Chambers County has been doing an exemplary job in the way of solid waste collection.

“They do it the right way,” he said. “They have a solid waste officer. If you contact them, you will get service. They operate differently from most counties. Macy Whorton and Jason Fuller have been very good to work with. We appreciate you having us here tonight to talk about our company, and we plan on giving back to the community. We will provide $500 in scholarships to deserving high school graduates in the local area.”

Sweeney said he’d been in the solid waste industry for 30 years and was glad to be with a growing company.

“We are a young company and have some very good people,” Franklin said. “I think we will continue to grow. Getting Randolph County in 2017 was big for us. It laid the groundwork for where we are today.”

AmWaste is headquartered in Sylvan Springs, near Birmingham. Sweeney said the company is considering relocating its corporate office to the east Alabama and west Georgia region.

LIONS CLUB PROGRAM: Representatives of AmWaste, the local area’s new solid waste provider, spoke to members of the Valley Lions Club Monday evening. Cal Franklin, third from left, the company’s director of municipal marketing, said the company was happy to be in Chambers County and planned to update its equipment. AmWaste will also be replacing damaged curbside containers with new ones. Standing at the far left is Rick Sweeney, vice president of operations. Second from the left is Phillip Sparks, club president, and at the far right is Sam Bradford, program chairman.