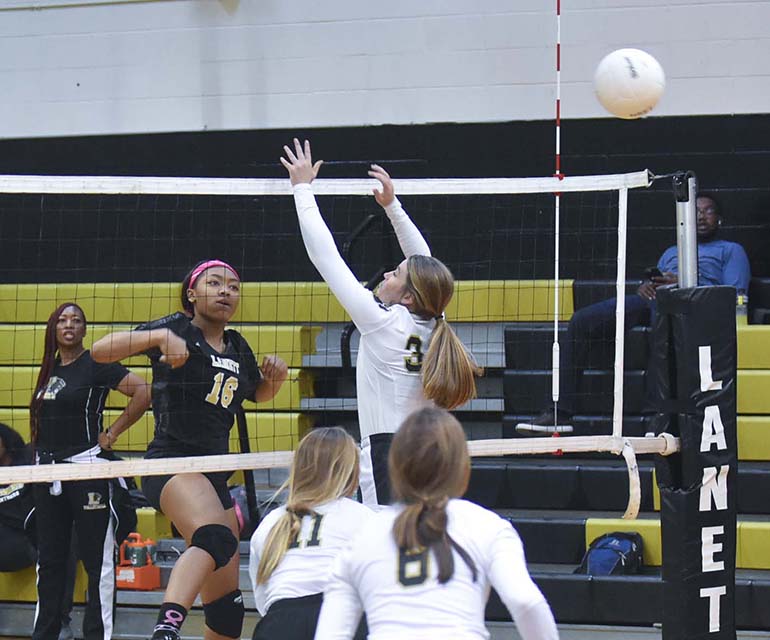 However, a steam of momentum came pushing the Bobcats to wins in sets three and four, forcing a winner-take-all fifth set.

Lanett came out firing on all cylinders to begin the final set, leading 8-1, halfway to match point, but Beulah came back striking again.

“Lanett is a much-improved team,” Beulah head volleyball coach Allison Aikens said. “They played well. We just came out and played flat. I don’t know if it was the road game that we had on [Tuesday night at Randolph County], but we missed several serves that we haven’t been missing in the first two games.”

Beulah began to build momentum from the 13-8 deficit by cutting the Panthers’ lead down to three. After the Bobcats trailed 13-12, the players began smiling on the court, before taking a 15-13 lead that forced a Lanett timeout.

“It’s been the same thing that I’ve been telling them all year, is that we have not found out a way to finish,” Lanett head volleyball coach Krisse Story said.

The Panthers came out of the timeout still hanging in there with Beulah, playing for competitive points in back-and-forth battles with the 3A Area 6 regular season champs.

The Panthers seemingly found enough wind to make one final push in the last set of the night before the Bobcats finish the game on a 14-3 run.

“To lose that lead, I could feel the air go out of the girls,” Story said. “It’s almost as if they freeze up like ‘we don’t deserve to win,’ or ‘are we going to win?’ When they freeze up and they’re not doing what they’re supposed to do, they’re not moving their feet. Things of that nature, letting balls drop, letting the balls out of bounds and that’s something that they have not been coached to do and that we discipline them at practice for.”

Wednesday night was the latest match that Lanett remained competitive against a larger school. At the beginning of the season, the Panthers won a set against 7A Central. Lanett has also swept crosstown 5A rival Valley in straight sets this season.

“I think we’re headed in a positive direction,” Story said. “If the girls keep working hard, if we keep learning the game — we have some ninth-graders who are tremendous athletes. Basketball, volleyball, track, they’re tremendous athletes. Our future at Lanett with volleyball is bright. We have some girls who are learning the game. As a coach, I’m still learning, and I’m giving them what I have learned. I’m excited about the future of volleyball at Lanett.”

With the junior high season coming to a close on Tuesday night, many Panthers were called up to join the varsity squad, including freshman Samharia Davidson, who was one of the standout performers on Wednesday night. Juniors Amari Boyd and Kyra Winston also had standout performances for the Panthers.

Freshman Brandy Phillips led the Bobcats with five aces to go along with her one kill and a blocked shot in the victory. Senior Danielle Williams led Beulah by finishing with three kills, while senior Camryn Harris led the team with three blocked shots. Senior setter Sydney Knight kept the Bobcats upbeat when the team was down in the first half of the match.

Both teams are now on the verge of beginning the postseason next week at area tournaments. Beulah is hosting its area tournament next Monday with its opening match expected to begin at 2 p.m. CDT.

“We’ve got to fight. We had some adversity [on Wednesday night] coming in here at the end of the season,” Aikens said. “If we don’t fight, if we don’t play our best and we don’t play from start to finish? We’re going to play one game and come home. What they showed me [on Wednesday night] is that they want to win, they want to fight, they have the will to win. We just have to put it from game one to game three and not wait until set three to get started.”

Lanett heads to Wadley next Monday afternoon to face Winterboro at 5:30 p.m. CDT.