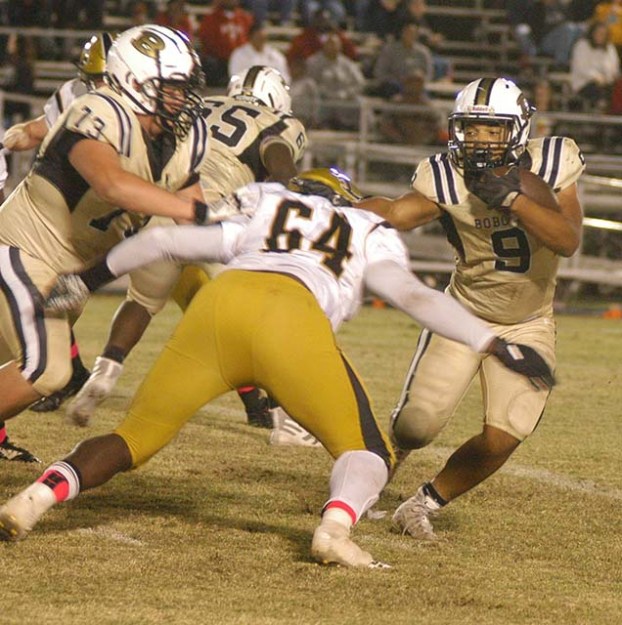 Wayne Clark | Times-News hurricane chris: Beulah senior running back Chris Person tries to get around a Dadeville defender on Friday night. Person finished the night with 98 yards on 15 carries.

BEULAH — It was a familiar script for the Beulah Bobcats on Friday night – get out to a big early lead, then play on even terms with the opponent for much of the game and fade in the late going. The Bobcats had an early 12-0 lead, was in a 14-14 tie in the third quarter before visiting Dadeville came on strong in the late going, winning the game 35-14. With the loss, Beulah falls to 3-5 overall and 1-4 in 3A Region 3. It was the team’s fourth straight loss. Dadeville improved to 2-7 and 1-5 in the Area.

Beulah stopped an early Dadeville scoring threat when Jaquavion Johnson intercepted a pass in the end zone and ran it out to the 20. From there, Beulah took it 80 yards to break out on top 6-0. Quarterback Kaleb Abney and senior running back Chris Person did most of the damage on the drive, and Johnson scored the touchdown on a 12-yard run around the left end. The PAT failed, and with 7:14 showing in the first quarter, the Bobcats had a one-score lead.

Beulah extended the lead moments later. Senior defensive back DeShawn Jones picked up a Dadeville fumble near the 20 and ran it back to the 13. Penalties backed up the Bobcats, brining about fourth and long on the 24, but the offense came up with a big play when Abney found Quay Moreland open in the back of the end zone for a score. The TD pass had Beulah on top 12-0 with 4:42 left in the opening quarter. A try for two points failed, but Beulah looked to be in great shape, especially given that they were at home versus a 1-7 team.

But the rest of the game belonged to Dadeville. Give them credit, they outplayed the Bobcats and deserved to win. Beulah had their chances, but hurt themselves with penalties and poor execution. For the game, Beulah had 17 penalties for 150 yards. Ouch! They also had three turnovers.

They cut Beulah’s lead to 12-7 on a 75-yard TD pass from sophomore quarterback David Smith to senior wideout Jamarion Smith. They took a 14-12 lead with 9:29 left in the second quarter on a 15-yard pass from Smith to Wilkerson. That lead held up at halftime.

The Bobcats tied the game in the third quarter courtesy of a break. Dadeville snapped the ball over the punter’s head and out of the end zone. That knotted the game at 14-1ll with 8:37 left in the period.

From there on it was all Dadeville. The visitors took the lead for good when Smith connected on a 22-yard scoring toss to Cooper Childers. Alex Sims’ extra point made it 21-14 with 1:25 left in the third quarter.

Beulah had a great chance to tie the game when Andruw Coxwell intercepted a pass and ran it back to the Dadeville 20. Unfortunately, Beulah was called for roughing the passer on the play. That game the ball back to the Tigers with a first down near the 50. They went on to take a two TD lead, 28-14, on a 13-yard run by Javuntae Holley with 7:02 left in the game. That pretty much put it out of reach, but Dadeville managed a late score to win by three scores, 35-14.

Person was Beulah’s offensive star, having 98 yards on 15 carries. Moreland had 49 yards on 11 carries and Johnson 39 yards on four carries.

Sellers had six tackles to lead the way on defense. Coxwell and Conway each had five.

Beulah takes to the road next week with their final area game of the year. They will be at Pike Road. They will close out the season versus McKenzie on Nov. 1.

Chambers shuts out Meadowview, ready for No. 6 Bessemer