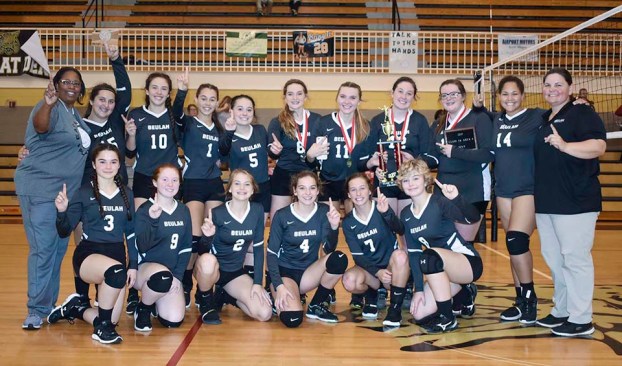 Rashad Milligan | Times-News bobcats on top: Beulah won the 3A Area 6 tournament on Monday afternoon after sweeping Dadeville 25-19, 25-17, 25-20. The team now heads to Montgomery later this week to compete in the regional round.

“The girls have worked hard all season, we’ve been close in the past so it’s nice to finish strong and get that area championship,” Beulah head volleyball coach Allison Aikens said.

Dadeville came out of the gates leading 6-0. The Bobcats called a timeout after trailing 5-0.

Coming out of the timeout, Beulah was still struggling with serving and getting the ball over the net offensively.

Then, Bobcat seniors took matters into their own hands.

Senior middle hitter Camryn Harris served back-to-back aces when Dadeville had a 12-6 advantage. Senior setter Sydney Knight, who was visibly frustrated on the court earlier in the set, then began to show aggression offensively that she doesn’t typically show.

“Early on I knew I was doing bad, but I wasn’t going to let the last game of my senior year in my home gym go that bad,” Knight said. “I decided to pick it up, help everybody on my team, encourage everybody and we eventually turned it around.”

Kills by freshman left hitter Brandy Phillips and senior middle hitter Danielle Williams got the Bobcats back in the match, bringing the score within one point at 16-17. Beulah eventually tied the set at 18 thanks to Knight before completing an 8-1 run to take the opening set.

“I was kind of worried that they were going to beat us,” Williams said. “But we stood our ground in our gym, fought as hard as we could and we showed out tonight.”

Outside of trailing 0-1 in the second set, Beulah led for the remainder of the match.

The team’s effort allowed room for perhaps the highlight of the match in the second set when sophomore left hitter Katie Morris made a sliding save near the Bobcats’ bench to Williams, who got the ball over the net, before a Dadeville striker was met at the net by Harris and Phillips for a block and Beulah score.

A lively student section sat in the upper deck of Jerry Southwell Gymnasium, provided the noise from megaphones, cowbells and chants throughout the match. At the end of each set, students in the section let out confetti to celebrate each victory for the Bobcats.

Beulah now heads to Montgomery on Thursday for the regional round to face 3A Area 3 runner-up Geneva (20-14 in the regular season). The Bobcats need to win at least two matches in Montgomery to qualify for the state tournament.