Chambers Academy celebrates half a century over the weekend 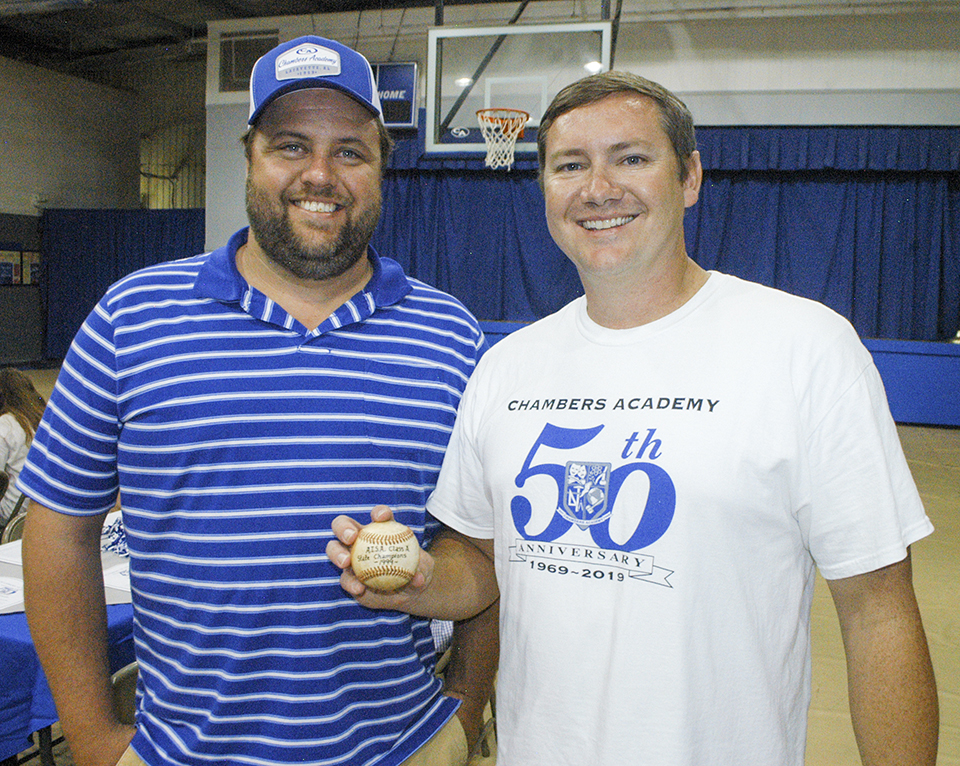 “We thank all of you for taking the time to come here this evening and to reminisce with your former classmates,” said Headmaster David Owen in opening remarks. “We are having a good year at Chambers Academy. Having you here is the icing on the cake. It’s been a wonderful journey, and we are still having a great ride.”

Chambers Academy was formed on Christian principles in 1969. An independent school, it is accredited by AISA and AdvancEd. Current enrollment includes 218 students in grades kindergarten through 12th grade and another 38 students in the Early Learning Center Pre-School program. Of the current enrollment, about 120 students are from the LaFayette area, 19 from Beulah, 12 from Opelika and 10 from Tallapoosa County.

In that first school year in 1969-70, there were 35 students at Chambers Academy and four teachers. Tuition was $500 a year per student. Charles Torbert Jr. donated the land the school was built on. His two children attended school there.

The school went through a period of rapid growth in the 1970s and topped out with an enrollment of 326 students in 1980.

The current head coach, Jason Allen, has led the school to unparalleled success in sports. In 2014, he guided the school’s basketball team to a state championship. The football team has won 53 of tis last 58 games and played for state titles in 2015, 2016 and 2017 before winning the title in 2018.

A large gathering was present inside the school gym for fellowship, dinner and the 50-year anniversary program. Senior Peyton Lamb presented a slideshow of past and present events at the school. The presentation brought back pleasant memories for many and offered some interesting insight on what’s now taking place in the classroom.

Headmaster Owen talked about where the school is at the present time and where he and fellow board members would like for it to be in the future.

The school’s mission is “to provide our students with an exceptional education in a Christina environment, including experiences that prepare them for a journey of lifelong learning. We aspire to develop in our students a strong moral foundation and intellectual ability to prepare them for the challenges of adulthood.”

“We have great working relationships with our local churches, three of which prepare the pre-game meals for our teams,” Owen said. “We have monthly assemblies where the students can hear from respected speakers. We are all about supporting family. We have grandparent days and programs to salute our veterans. We are blessed with a great staff. Eleven of our 25 staff members are former CA students. Our Early Learning Center is licensed by the state. Four classrooms serve newborns through K-4. This program is feeding the lower school, where we have 16 kindergarten students.”

Chambers Academy’s Class of 2019 earned an estimated $1.3 million in scholarship awards. Members of this year’s senior class have been attending college and career prep programs. The eighth graders recently attended the Alabama Fire College training program held at the Career Discovery Expo sponsored by Alabama Works. The school started a robotics team this year and are enjoying experiencing the arts through theater productions produced any Mrs. Abney.

Chambers Academy is promoting a unique AR legacy. “AR” stands for Accelerated Reader and beloved staff member Athelia Richardson. Plans are to have a courtyard area dedicated in her honor.

A fun event on part of the students that has met with considerable success is a bass fishing team. It’s getting great participation. Last year’s team finished second in the state, and the junior varsity placed first in their division.

Visitors to the school are immediately struck by the school’s appearance and the presence of technology in the classroom. The school’s hallways are newly painted, and there’s new carpeting in seven classrooms.

“We are reaching for new heights at Chambers Academy,” Owen said. “Our teachers and coaches continually push our students to not only reach their goals but to chase their dreams. We are proud of the way their support our community through such efforts as backing the Hike/Bike/Run for Valley Haven School and tornado relief for the Beauregard community. They really enjoy taking part in such events as the Valleywide Christmas Parade.”

Something in the works is an LED sign in front of the school.

“We think this will be a really good addition,” Owen said.

School choice is a means of getting students to attend Chambers Academy. Around 4,000 students statewide have used tax-credit scholarships that help them attend schools like Chambers.

“Lawmakers created an incentive for donors by allowing them to take dollar-for-dollar state tax credits for donations,” Owen explained. “It’s a great way to give back in the form of tax credits. You can help your school at the kids here by doing this. We have been blessed to be here and are looking forward to a great future.”

One alumnus present kidded with Owen that he’d only recently noticed the sign saying “Don McGinty Lane” leading to the school.

“Y’all do know where that road ends up?” joked back McGinty. “It goes to the lagoon.”

McGinty added that he’d once told a friend that he’d never live in LaFayette, Alabama.

“I guess I was wrong about that. I’ve been here 40 years now,” he said to laughter and a lot of applause.