Chambers Academy gets over semifinal hump, falls short in championship 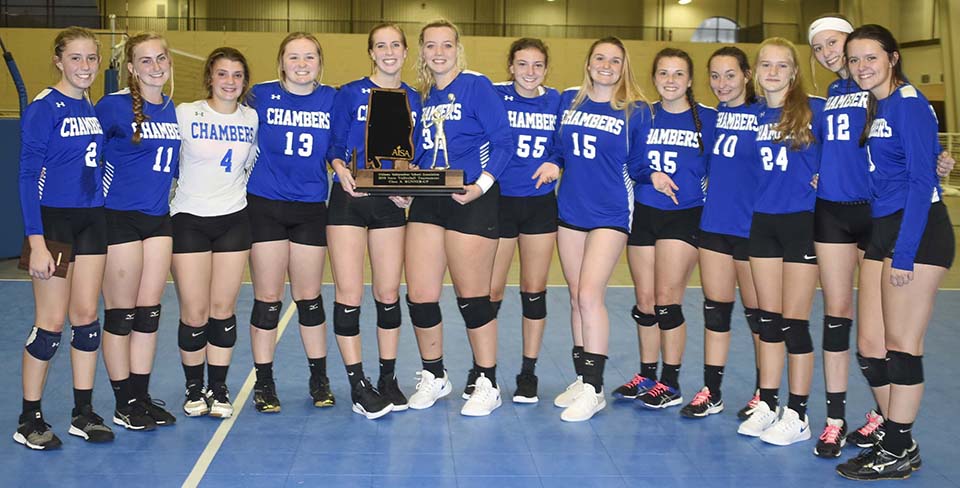 Rashad Milligan | Times-News one team: The Chambers Academy varsity volleyball team poses with the AISA 1A runner up trophy after defeating Cornerstone Christian in the semifinal and losing to Southern Academy of Greensboro on Thursday afternoon.

“I’m kind of hurt that we didn’t make it through, but I’m still proud because we tried hard,” Chambers Academy senior libero Audra Slay said. “We kept the grittiness and we tried to play as hard as we could. Southern was a really good team. I feel like if we played better, we could have beat them, but sometimes we just have our days and today was one of those days. I’m proud of everyone who played.”

Southern opened the first set with a 5-1 run that forced a Chambers timeout. Southern then scored two more consecutive points before Rebels sophomore outside hitter Bailey Allen got a kill to get Chambers back on the board.

As the deficit continually grew, Chambers Academy’s teammates remained positive to each other from the sideline to the court. Bailey tried to keep the Rebels in it by scoring the team’s next couple of points, but the rally fell short as Southern controlled the momentum and won the first set 25-8.

Chambers came out energized in the second set with newfound confidence after going up 3-0 early on. Junior middle blocker Britten Stephens emotionally kept the team engaged on the court as Bailey remained the steady source of the majority of the team’s offense. The Rebels’ student section grew louder as Chambers Academy took a 12-8 lead, but Southern fought back and tied the set 12, forcing a timeout from the Rebels.

Chambers Academy spent the remainder of the set fighting to regain the lead as sophomore Claire Allen also had an impressive performance. The competitive second set of the day still went to Southern, however, in a 25-20 decision.

In the third set, Chambers came out aggressively facing a loss. Many of the Rebels’ spikes, though, were unable to make it over the net or sailed out of bounds. Southern’s student section began to count down the final points to victory as Chambers’ final opponent of the season took the final set 17-25.

Slay and Claire both finished the match with four aces, while Lindsey Fuller added two aces in the effort. Bailey led the team with seven kills in the championship.

Heads dropped and tears were wiped off the faces of multiple Rebels as the defeat sank in, while other teammates continued to console their peers.

“We strive for a victory every time,” Chambers Academy head volleyball coach Randy Bonds said. “We played an extremely talented and aggressive opponent. They came out on top of this one. We definitely could’ve played a little bit better as a team, I think a lot of that was nerves. Once they get that in their heads, it’s hard to catch up, but it was a very good opponent, I’m still proud of them. They played well as a team and Southern just did outstanding, they’re a good team.”

Slay, the team’s lone senior, walked over to hug her older sister, Hannah, as the two savored a personal moment together. She said that her sister told her that the loss wasn’t the end of the world before giving her life advice.

“[She said] sometimes in life, you’re going to come up short, but you still have to keep fighting on,” Slay said. “She was really upset that we didn’t win, but it’s life and it happens.”

Slay returns to Montgomery this weekend to represent the east in the AISA All-Star Game.

The Rebels’ first loss of the season came at the beginning of the year to AISA 2A champion Edgewood Academy.

“That’s pretty good considering this was a new team with a new coach,” Bonds said. “Next year, we have pretty much the same team, so we’re hoping for a better year.”

Thursday marked Chambers’ fourth-consecutive trip to the volleyball state semifinal. This was the first season that the program advanced to the state final after defeating Cornerstone 25-9, 25-20, 25-10 earlier on Thursday afternoon.

“The semifinal went well,” Bonds said. “We played great, it was a solid game all the way around. We came out on top fairly easy with that one. [It was] very good.”

Claire and Bailey both received all-tournament honors after the championship match.

“I talk a lot with each of the girls about their strengths and where we place them,” Bonds said. “Each of them has important roles for the team. Bailey and Claire have been playing a little bit longer than a lot of the other girls, they also play club ball. Their play has been pivotal to the success, but each of the players has been improving, we’ve been working each of the corps player’s abilities and what they’re best at. I’m just proud of how every single one of them has grown this season.”

The program is expected to return much of its corps next season, which includes Bailey, Claire, Stephens, Kayla Chambers and Megan Ware.